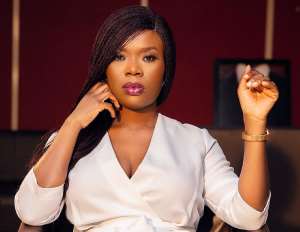 The regular host of the popular Delay show, Deloris Frimpong Manso has finally accepted to work for Chairman Wontumi’s Radio Station in Accra, ‘Radio Wontumi 101.3’ as their drive time host.

In a Facebook post today, May 9, 2022, the seasoned broadcaster stated she is back on radio from today.

She is asking Ghanaians to expect her on WONTUMI RADIO 95.9 Accra from 3 pm to 6pm.

This comes after she appeared on Accra-based Wontumi Radio as a drive time host on Friday, April 22, 2022, after many years of quitting her work as a radio broadcaster.

Afterwards, the Ashanti regional chairman of the ruling New Patriotic Party(NPP), Mr. Antwi Boosiako popular known as Chairman Wontumi, the owner of the Wontumi Media Group is alleged to have appealed to her on working permanently with his radio station.

However, based on the post and reports this portal can affirm that the celebrated broadcaster will be working permanently with the Accra-based Wontumi radio from now onwards.