Mali nonuplets: one year old and already a happy handful 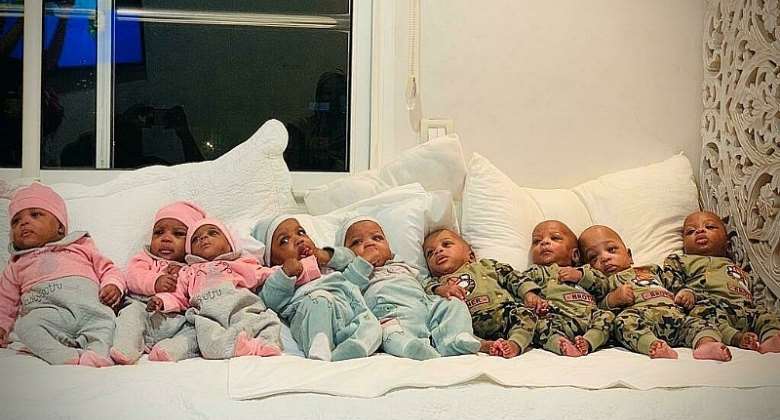 The birth of Mali's nonuplets – nine babies born at the same time – was such an unusual event that some believed it was a hoax. But as they marked their first birthday this week they're all in good health and the family hopes to head back home to Timbuktu soon.

The birth of nonuplets to a Malian couple on 4 May 2021 was a world first and the siblings achieved the Guinness World Records title for the most children delivered at a single birth to survive.

It was a high-risk pregnancy for the mother Halima Cissé, and the babies were delivered after just 30 weeks.

Some of them spent more than three months in an incubator and there were concerns they might not all survive.

But this week all nine marked their first birthday in Casablanca, Morocco where they were born.

They're crawling and some are taking their first steps says their father Abdelkader Arby, even if looking after nine infants is exhausting.

Arby has just come back to Morocco for the first time in six months, along with their three-year-old daughter, Souda.

She had remained in Timbuktu while her mother was transferred first to Bamako, then Casablanca, and met her nine siblings for the first time this week.

“It was a moment of joy and stress for her," says the father, laughing. "She wanted to smile, but was also stressed to see them together. Mashallah, it was very, very beautiful."

He plans to stay in Casablanca for several weeks before returning to his job as a sailor in the Mali army.

The family is planning to return to Mali soon, but have yet to fix a date.

Ahead of the birth, Cissé was flown to Morocco by the Malian government for specialist care and the authorities continue to support the family from a distance.

She and her nine offspring are being take care of in a kind of medicalised flat belonging to the owners of the private Ain Borja clinic in Casablanca where the babies were born.

Dr Khalid Mseif has been monitoring them from birth.

“The parents have been helped from the outset,” he told RFI. “Nurses come and help them because it's not easy to take care of nine babies at the same time. It's very hard, a lot of work."

The babies have had "the usual problems affecting infants in their first year: bronchiolitis, bronchitis. But in principle everything's going well and they haven't had many health problems.

"We're very happy to see them all here, a year later, in good health.”

The health and wellbeing of the children was made possible thanks to a number of doctors in Mali and Morocco, the Malian authorities and King Mohammed VI of Morocco who allowed the mother to be transferred to the kingdom in the middle of the Covid-19 pandemic.