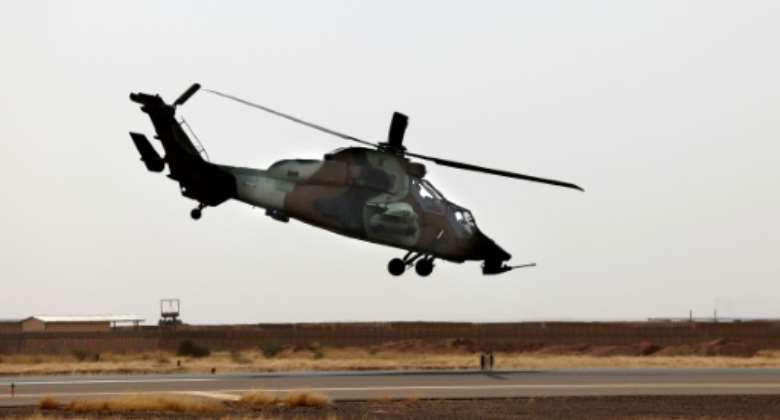 French air support has been a big factor in Mali's fight against jihadists. By Thomas COEX (AFP)

Mali's junta said France no longer has a "legal basis" for carrying out military operations in the country after Bamako quit key defence accords, in the latest round of a spat between the two former allies.

The announcement late Tuesday came a day after the junta walked out of several agreements underpinning French and European missions in the jihadist-hit state.

Foreign Minister Abdoulaye Diop declared on state TV that it would take six months for the formal end of a 2014 defence cooperation agreement with France to take effect.

However, the legal end of agreements signed in 2013 and 2020 on France's Barkhane and Europe's Takuba operations in Mali applied immediately, he said.

France deployed thousands of troops in Mali, backed by drones and warplanes, under its Barkhane operation -- a mission aimed at helping fragile allies in the Sahel fight a brutal jihadist insurgency.

Tensions rose to near-breaking point after the junta brought in paramilitaries that France and others say are mercenaries from the controversial Wagner group.

In February France, citing "obstructions" by the junta, announced a pullout of its forces from Mali -- a measure that also applies to Takuba, a French-led mission comprising special forces from European allies.

Mali's decision to quit the agreements has raised questions about the repercussions for the French withdrawal -- expected to be completed in the coming months -- and whether French operations will continue in the interim.

Diop said that Barkhane was already withdrawing from Mali and France could continue to work on the pullout.

However, "anything which takes place on the territory of a sovereign state should be discussed and agreed with the state which is in place," he said.

The host state, "quite responsibly, will ensure that things are being carried out correctly and on time with what the government wishes to be appropriate," he said.

France's foreign ministry on Tuesday said Mali's renunciation of the agreements was "unjustified."

It also contested that the agreements covering Barkhane and Takuba could be ditched with immediate effect.

Mali denies having called in Wagner and has indicated willingness for state-to-state cooperation with France.

"We believe that we need to combat the terrorist threat in Mali. We'd like to see constructive work with the international forces in Mali and with the transitional authorities in Mali," said its spokesman, Peter Stano.

On April 11, the EU said it was "halting" its training missions in Mali, although it would maintain a presence in neighbouring countries.

The announcement came after reports of a massacre of civilians in the central Malian village of Moura in March involving government forces and white foreign soldiers, suspected to be Wagner operatives.

The EU has several hundred troops and experts in Mali, where they are helping to train the army and national guard.

The mission lies outside the framework of Barkhane, Takuba and the UN peacekeeping mission in Mali, MINUSMA, which has several contingents from European nations.

The MINUSMA force in Mali is one of the UN's biggest peacekeeping operations in the world. By FLORENT VERGNES (AFP)

With 14,000 troops and police, MINUSMA -- the Integrated Stabilization Mission in Mali -- is one of the UN's biggest peacekeeping forces.

It has also suffered heavy casualties, with 159 dead and 426 seriously wounded, according to its website.

The UN mandate for the force authorises French forces to support MINUSMA "when (it is) under imminent and serious threat."

Asked by AFP as to the impact on French backing from Mali's renunciation of the accords, MINUSMA spokesman Olivier Salgado said "we highly appreciate this support."

"If the situation changes on this issue, that will obviously lead to consequences that... we will have to take into account in plans for adapting," Salgado said.

Speaker Bagbin calls on Israeli counterpart in Jerusalem
49 minutes ago