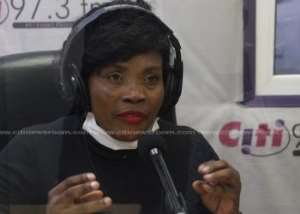 The General Secretary of the People's National Convention, PNC, Janet Nabila, has denied reports that she was arrested at the party’s headquarters on Monday, May 2, 2022.

A statement by the PNC signed by its National Organizer claimed that the embattled General Secretary had been arrested by the Nima Divisional Police Command for defying a court order not to enter the party's headquarters despite her suspension.

Speaking to Citi News however, Janet Nabila described the said arrest as a hoax by party executives to tarnish her image.

“This is a blatant lie. There was no arrest. This is a clear attempt by the party executives to make me unpopular.”

“Whilst our party office is under lock, and the key is with the Accra Police Command, none of the two factions is allowed to access the party office until the National Disciplinary Committee decides. She went there on Saturday and broke into the party office. The Police proceeded to arrest her, so I do not know why she is denying it. She was with the police for about 4 hours. She was only released after some of the party members got the Police to grant her bail.”

“She has proven not to respect the rules of the party,” he added.

Akufo-Addo going to IMF is not victory, it's a day of sadnes...
37 minutes ago