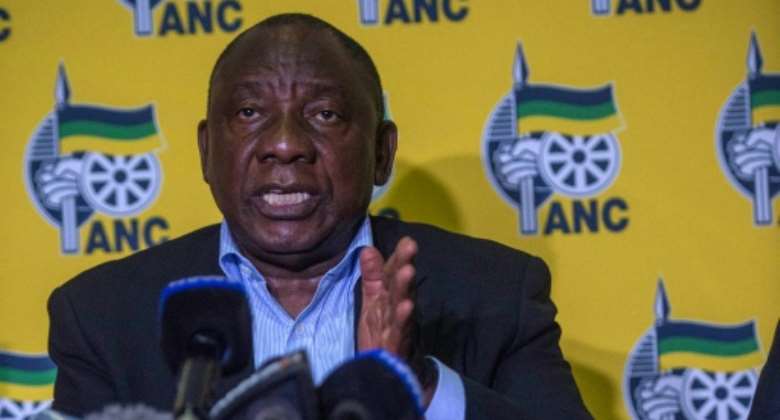 Ramaphosa is battling a deep economic slump triggered in part by the Covid-19 pandemic. By MUJAHID SAFODIEN (AFP/File)

President Cyril Ramaphosa on Tuesday acknowledged mounting public frustration with South Africa's leadership and institutions, two days after miners booed and drove him from a May Day celebration rally.

Ramaphosa -- a mining union leader under white-minority rule -- was forced offstage and taken to a police armoured personnel carrier after miners shouted him down.

The protest took place during a televised ceremony organised by country's largest union, COSATU, at a stadium in the northwestern town of Rustenburg.

"I was... unable to address the gathering because workers there had grievances that they expressed loudly and clearly," Ramaphosa said in a weekly newsletter.

"While the main grievance appeared to be about wage negotiations at nearby mines, the workers' actions demonstrated a broader level of discontent," he said.

"It reflects a weakening of trust in their union and (COSATU) federation as well as political leadership, including public institutions," Ramaphosa said.

It described the interference in Ramaphosa's address as "regrettable and unacceptable" but said the protest "to a certain extent, reflects the growing frustration among workers in South Africa."

South Africa is the continent's leading economic power but was hit hard by the Covid crisis, and unemployment is at a record 35 percent.

Tension in the labour market has fuelled anti-foreigner sentiment and sporadic demonstrations.

Analysts believe South Africa's political leadership has suffered a slump in trust among the public at every class level, and that the decline has persisted for more than a decade.

"The situation that Ramaphosa as a state president is facing, is similar to the one that was faced by Jimmy Carter around 1979 in the US where people had lost complete confidence in state institutions and in the leadership cohort," said Sandile Swana, an independent political analyst.

Ramaphosa helped found the National Union of Mineworkers in 1982. After the end of apartheid, he entered the private sector, becoming a highly successful businessman before returning to politics, serving as vice president to Jacob Zuma.

He ascended to the presidency in 2018 after Zuma was forced out by mounting corruption scandals.

In 2012, Ramaphosa's image was badly tarnished when police killed 34 striking workers at the Marikana platinum mine, near Rustenburg, and then operated by Lonmin, where he a non-executive director at the time.

Ramaphosa had called for a crackdown on the strikers, whom he accused of "dastardly criminal" behaviour.

Ramaphosa faces a leadership election in the ANC in December.

But "what is not secure is the ANC majority vote in 2024 and in 2029" when general elections take place, Swana said.

"The ANC is probably on an irreversible downward spiral and Ramaphosa is the chaperone, the escort of the ANC into the grave," Swana argued.