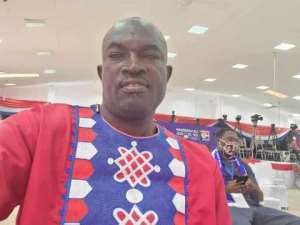 The former Effutu Constituency Chairman of the ruling New Patriotic Party (NPP) in the Central Region, Mr. Theophilus Kojo Halm has cautioned the youth in the Municipality against any act that would mar this year's Aboakyer festival in the Winneba and its surrounding communities.

According to Mr. Kojo Halm, this year's Aboakyer festival would be celebrated in grand style. "So nobody should think of doing any acts that would make the beauty of the worldly recognized festival celebrated annually by the Chiefs and people of Effutu at Winneba."

He however praised various youth groups in the Effutu Municipality for their full participation in programmes and activities scheduled for the forthcoming festival.

Interacting with Newsmen at Winneba soon after the swearing in of newly elected constituency executives of NPP at Winneba, the former Chairman stressed the need for unity to prevail in Effutu to achieve the needed development in the area.

Mr. Kojo Ham encouraged the constituency executives to discharge their duties diligently in order to attract more people into the party.

Giving account for his stewardship over the past 12 years as Constituency Chairman, Mr. Theophilus Kojo Halm noted that the Effutu Constituency has become attractive thus making members of the NPP proud to be associated with.

"Since I became Effutu Constituency Chairman over 12 years ago, I did my part with support from our Member of Parliament for Effutu Constituency Hon. Alexander Afenyo Markin fought vigorous to change the voting style which was becoming a one-way for the NDC.

"When I became Chairman the NPP was owing the NDC a deficit of 4,000 political votes we canceled it and went ahead to get the same 4,000 votes difference and subsequently increased it to over 9,000 votes.

"Just recently in the 2020 General Elections, the NPP in the Effutu Constituency increased the margin to over 15,000 votes. I did all be these with collaborative efforts of all and sundry.

"Today, the NPP in the Effutu Constituency has become a 'No Go Area' for other political parties in the whole of the Central Region due to prudent measures that had been built over the years.

"I'll like to urge my newly elected Constituency Executives to emulate this shining example and improve upon it in the coming years," he stated.

Mr. Theophilus Kojo Halm hinted that he would contest for Central Regional 1st Vice Chairman of the NPP when nominations opened in the coming months.

"I want to make the NPP in the Central Region more attractive similar to what I have done in the Effutu Constituency.

"I will bring out my experience and strategies to bear fruit in the region so we can increase our votes and to win more Parliamentary seats for the NPP.

"It is unfortunate that the NPP continue to win in the Presidential Elections but dwindled to Parliamentary seats.

"If given the nod, I will work closely with my Regional Chairman and his Executives to enhance the fortune of the party," he emphasised.

While congratulating the newly elected Constituency Executives, the Effutu Municipal Chief Executive, Hon Alhaji Zubeiru Kassim pledged his support to the executives with a promise to work hand in hand with them.