Provocative songs, a prelude to communal violence in India 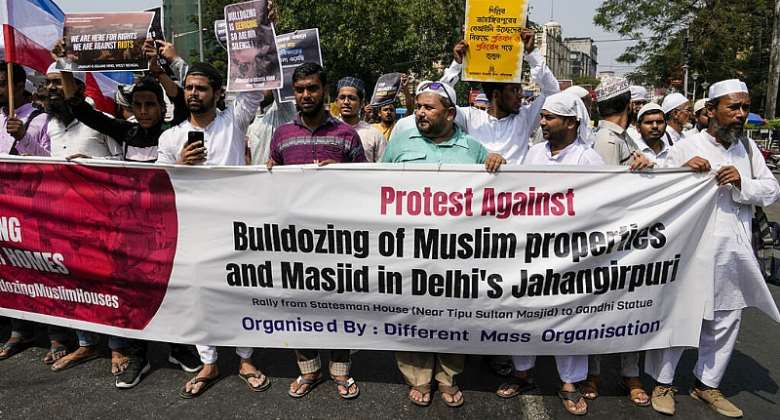 In the last few weeks, violence against members of Muslim community has been reported in over seven Indian states. Videos circulating on social media show provocative slogans and songs played in Muslim areas and in front of mosques, leading to clashes.

One person has been killed, Muslim-owned homes have been razed, and there were attempts to raise saffron flags in mosques during the Hindu festivals of Ramnavami and Hanuman Jayanti celebrations this year.

Eyewitnesses point out that provocative songs directed at Muslims have become a forerunner to the series of attacks.

In Rajasthan's Karauli town for instance, a provocative song was blasted out of loudspeakers, and stones were pelted when a bike rally passed through Atwara, a Muslim-majority enclave.

“It may have been devotional music. But there were enough allusions to the skull cap used by Muslims and was inflammatory,” Ram Rehman, a shopkeeper told RFI.

The song played out was immensely popular on YouTube, where it had amassed about 450,000 views over the past four years.

Political pundits refer to the new trend as “saffron pop”, a reference to the colour associated with the Hindu religion and favoured by Hindu nationalists.

Many such songs openly call for the killing of Muslims and those who do not endorse "Hindutva," a Hindu nationalist movement that seeks to turn officially secular India into an avowedly Hindu nation.

“In previous decades in India, it sometimes took a provocative speech from a leader for violence to spill into the streets. Now, it seems all one needs is a DJ. Play the music and violence will reverberate in the streets across the states,” said Brahma Prakash, an assistant professor of Theatre and Performance Studies at Jawaharlal Nehru University.

“Music, in fact, played a prominent role in the rise of the Third Reich. Fascists loved it. Italian dictator Benito Mussolini was a keen violinist and music critic. German Nazi dictator Adolf Hitler was a great fan of opera,” Prakash wrote in a recent article.

One particular song, heard before violence broke out in Gulbarga in the southern state of Karnataka, referred to the demolition of the Babri mosque in the holy city of Ayodhya, a city in northern Uttar Pradesh that has been marred by sectarian violence for decades.

In Koderma, in east Jharkhand, videos of crowds dancing to songs describing Muslims in a shameful way have also surfaced.

Some of the worst rioting was reported from the district of Khargone in the central state of Madhya Pradesh, governed by the ruling right wing Bharatiya Janata Party (BJP). Here, too, the violence was preceded by loud music, according to eyewitnesses.

“All these songs that were played out in various places are nothing but an incitement to violence. The authorities have looked the other way,” political analyst Manish Jha told RFI.

It showed that anti-minority attacks are on the rise across India, primarily against the Muslim and Christian communities.

The issue of hate speech has often come up before India's courts but the judiciary has been wary of imposing restrictions on free speech.

PRINPAG goes to the polls on August 12 to elect new executiv...
5 minutes ago