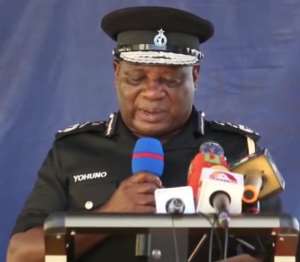 The Tema Community Two District Police of the Ghana Police Services gets an ultramodern office complex - a conference hall, kitchen, offices for in-charge and other departments of the Police Service, male, female, and juvenile cells, among others, replaces the old dilapidated one, which was constructed in the 1980s.

Commissioner of Police (COP) Christian Tetteh Yohuno, Director General, Administration of the Ghana Police Service on behalf of the Inspector General of Police (IGP) officially received keys to the edifice at a short ceremony which was monitored by the Communication for Development and Advocacy Consult (CDA Consult) at the Teme Community Two District Police Head Office.

COP Yohuno commended the Assembly and Madam Naa Torshie Addo for funding the project and called on others to come on board.

The Director-General, Administration of the Ghana Police Service said in line with measures to enhance 24/7 effective supervision of officers, and men of the service, as well as to relieve the burden on the few police officers.

The police administration has taken steps to enhance the number of commissioned officers to ensure that senior officers at the district level across the country run a shift system.

He said in line with this, 308 Cadet Officers were currently undergoing a revised training module that was designed to improve upon the quality of training.

COP Yohuno added that the model emphasizes more simulation exercises and practical lessons, to churn out competent officers to deliver upon their graduation from the police academy.

He urged police personnel to discharge their duties professionally reminding them that the Service would never entertain indiscipline among its men.

Handing over the structure to the Police Administration, Ms. Anna Adukwei Addo, Tema West Municipal Chief Executive appealed to the Inspector General of Police to equip the Police Stations within the Tema West Municipality with additional personnel to improve upon the manpower capacity and delivery time of security challenges.

She described investing in the Service as a national duty, stressing that security is a collective responsibility.

She said the enhanced structure would impact crime prevention, protection, and response time to threats, adding that the edifice would also motivate the Police Personnel, workers, and staff as the working environment is associated with public confidence.

Ms. Addo said the edifice would therefore go a long way to serve the intended safety requirements of the people of Tema Community Two as they go about their daily activities in a peaceful atmosphere.

She commended parties and stakeholders for providing leadership amidst challenges and prioritizing the completion of the project.