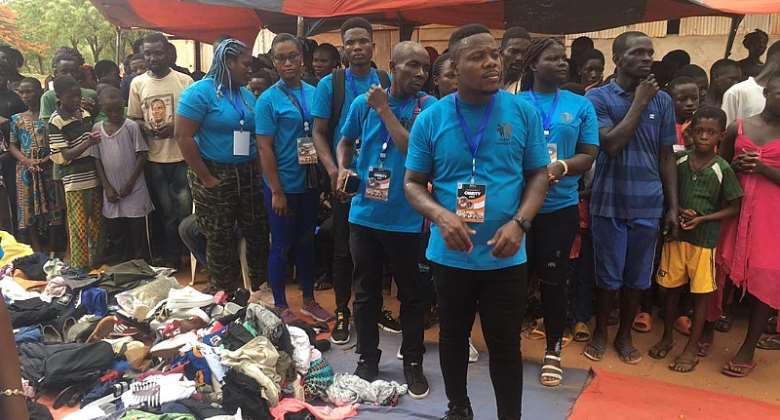 Isaac Fund Project Foundation, a non-governmental organization (NGO) based in Accra, has donated bales of dresses, food items, educational materials and footwears to more than 300 residents at Dedeso in the Eastern Region.

Mr. Isaac Afotey, the Chief Executive Officer of Isaac Fund Project Foundation, said at the presentation that the NGO realizes that the people of Dedeso need support considering their situation.

He said his foundation was established in Accra aimed at promoting the welfare of children by providing them with shelter, food, clothing, and education.

Mr. Isaac noted that the NGO had supported several communities in the country.

He asks for God's favor on those that contributed to the donation.

Making the donation last Saturday, 30th of April, 2022 at Dedaso, Mr. Japhet Festus Gbede on behalf of H.E Alhaji Said Sinare, The National Vice Chairman of the NDC who also contributed towards the donation encouraged the children not to feel disappointed in the situation in which they found themselves.

He stressed that a lot of prominent people in the country and across the world were once like them.

"Don't think you are in a village for that matter, you can't go to the nearby schools, learn, and be the next president of Ghana and change the story of your village one day", he stated.

The assemblymember of the area who received the items expressed gratitude to the NGO for their kind gesture and acknowledged the effort of the donors.