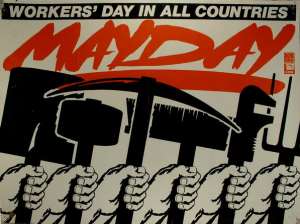 On this important Workers Day, May 1st, 2022, the SJMG wish to extend our fraternal greetings to the working people of Ghana, Africa and the World. Our statement is directed more especially to both the trade unions and all non-unisonised workers.

The sweat of labour produces wealth in any country. Workers deserve a fair and just deal from their labour. In this regard we call on the labour movement of Ghana to continue to struggle for a fair and just society and demand living wage for their work.

Working people must also take into account and fight against the following emerging malice that is infringing on the struggle for social and economic justice in the country.

Firstly, workers must eschew from their struggles the concept of workers neutrality in the governance of the country. In the struggle of working people for economic and social justice there is nothing like neutrality of the actions of government against working people. We however, support workers’ demands for emulations and other benefits. Following the coup of 24th February 1966 against Dr. Kwame Nkrumah, various ruling elites have always been on the side of foreign interests and the local elites.

Secondly, workers must fight against the introduction of money in the elections of their representatives. When money is introduced into union elections, it is right-wing leaders who are not for the interest of workers but for the interest of privileged classes who get elected. They will represent the interest of the New Patriotic Party (NPP), National Democratic Congress (NDC) and other powerful groups.

Thirdly, workers must fight and struggle against the introduction of payments of thousands of cedis by hard pressed Ghanaians for employment in the government sector. These nebulous acts are either perpetuated by government officials or fraudsters. This is destroying the fabric of the Ghanaian society and increasing corruption as the order of the day.

Finally, we call on workers to join efforts by progressive individuals and organisations who are working for an alternative to the decadent political system maintained by the NPP/NDC. We in the SJMG are working in the Progressive Alliance of Ghana (PAG), an emerging political party with distinct programme committed to replacing the neo-colonial order in the country and to usher in a new democratic and just society that will ensure that the labour of our working people benefit them, not the few international capitalist interests and their local collaborators.

Onwards with social and economic justice. The battle shall be won.

Solidarity with all working people.