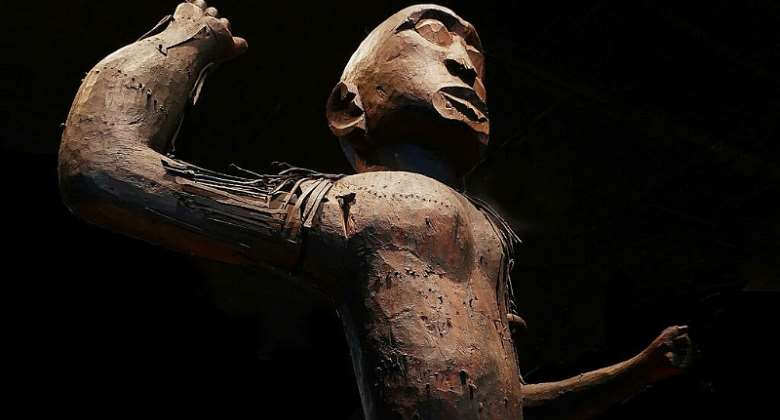 The much-celebrated return of 26 treasures from the Kingdom of Dahomey has culminated in a month-long celebration of heritage and art at the Museum of the Marina in Cotonou, Benin, attracting large crowds.

Visitors enjoy the exhibition overall, but for some, it's quite an emotional experience, says Theo, a tour guide at the museum.

“For other museum-goers, it's a part of our ancestors' souls that has returned. They don't take photos,” he tells Africa Calling podcast.

“There are also some visitors who are totally angry when they realize these treasures have been stolen and kept for more than a century by people, to whom they did not belong,” he says referring to the return of the artifacts by the French.

After 130 years, France returned 26 royal pieces from the Danxomè (also called Dahomey) Kingdom under an initiative to encourage better relations with African countries.

Looted by French soldiers from the kingdom of Dahomey in 1892, this is the first time a former colonizing country returned royal treasure, stolen during colonization.

On display at the Palais de la Marina in Cotonou since February, large crowds continue to come, a reception beyond expectations, says Alain Godonou, the Director of Benin's Museums.

“It's a huge success. It's true that we were prepared as well for the quality of the exhibition, but we were far from imagining what a popular success it would be,” says Godonou, adding that close to 35,000 visitors came to the museum during the first month of the exhibition.

Among the returned treasures includes thrones of former kings, four doors of the Royal Palace of Abomey, altars, recades, or royal scepters, statues representing former kings, a calabash, and army clothes from one of Benin's famed women soldiers.

King Guezo's large wooden throne is one of the attractions of the exhibition. He sat on his throne to give presents and gifts to his subjects. The throne reportedly had mystical power, which a French colonel tried to capture for himself, without success.

The throne and other royal treasures were in the public domain collection in France, and considered French artworks, which is why it took so long for these pieces to return. Years of diplomatic and political negotiation were necessary to bring the pieces home.

One of the special points of this exhibition is the fact that it displays ancestral art and contemporary art together, an occasion for visitors to discover modern Beninese art as well.

“There are contemporary artists, who have continued creating, despite the fact that they weren't connected to that history,” says Director Godonou, referring to the returned pieces.

“It was important too to show this dynamic and to show the world that there are still creators in our country. These two dynamics each have their own logic,” he adds.

In addition to the paintings, sculptures, and treasures, Palais de la Marina has created a space for living artwork, too. In order for all Beninese to enjoy the returned artifacts, the museum is holding special nighttime hours that coincide with performances, including singing, dancing, and slam poetry.

“The night exhibitions allow people who are busy during the day to come visit the treasures and to be able to enjoy living artwork, that comes alive and tell the story of our royal treasures,” says Carole Lokossou, artistic director of the night performances.

One of the featured live performances includes Bio Guera and the destiny of a people, a play by the late Benin playwright and documentary filmmaker Sévérin Akando.

It depicts how Bio Guerra, a great warrior, resists colonial imperialism. The piece, performed by more than 30 actors from the International School of the Theatre of Benin group, was among one of the more popular performances.

Appreciating your heritage is key, says artistic director Lokossou. Preserving the past by displaying important cultural objects reminds Beninese of where they come from, and who they are.

“The Beninese must know their history. Young Beninese must identify with their heroes. I don't know if we talked enough about Bio Guerra, who was a great conqueror, a great warrior, a figure to which every Beninese should identify in order to have pugnacity, rage to move forward and make great things for Benin,” she says.

This was originally heard on RFI's Africa Calling podcast.