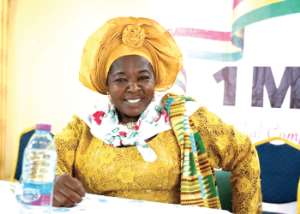 The Chairperson of the Convention People’s Party, CPP, Akosua Frimpongmaa Sarpong KumanKumah, has denied reports suggesting that she dragged five national executive officers of the party to the police.

Reports say she reported the members to the Adabraka Police station in Accra for allegedly making derogatory statements about her.

However, at a press briefing in Accra on Friday, the Chairperson denied the reports.

She however defended the interdiction of three CPP executives on April 1 this year, stressing that it was necessitated by the decision of the party’s Central Committee.

“Not too long ago, it was reported that I had reported five national executive officers of the party to the Adabraka Police station in Accra for making derogatory statements about me. These are absolute lies, and it was reported as though it’s the truth.”

“I was surprised when I heard the news, the best they could have done was to check with the police. The Police officer on the case was equally surprised upon hearing the news.”

The Central Committee of the CPP had earlier directed Akosua Frimpomaa Sarpong Kumankumah to step aside after she gained 43% of the total votes cast in their chairmanship elections of August 2020.

It said the votes she garnered do not make her qualified for the position she occupies.

In a statement, the Central Committee said it has resolved to conduct a run-off election between Akosua Frimpomaa Sarpong- Kumankumah and the first runner-up, Comrade Hajia Hamdatu Ibrahim.

Ms. Kumankumah said calls for her to step aside are needless, given that she legitimately won the election based on the majority of votes.

Ms. Kumankumah asked the committee to resort to the right procedures in getting their concerns addressed if they felt the processes leading to her election were illegal.

Meanwhile, the CPP Council of Elders has condemned the Committee's attempts to remove Ms. Kumankumah from office.

Hottest Photo Reports
Catch up with all the political quotes from our politicians.
Advertise here
More from CPP News
ModernGhana Links
“Come up with a better plan to industrialise Ghana”—CPP urges Government
CPP to give Nkrumah a befitting funeral after 50-years
CPP will not have introduced E-Levy — Nana Yaa Jantuah
TOP STORIES