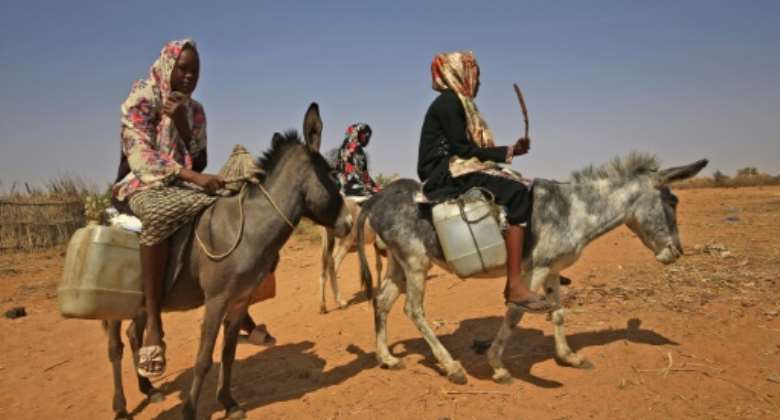 Sudanese women transport water in Darfur: the arid region remains awash with weapons and has seen a renewed spike in deadly violence in recent months triggered by disputes mainly over land, livestock and access to water and grazing. By ASHRAF SHAZLY (AFP)

Three people were killed Friday in Sudan's restive Darfur region, witnesses and an aid group said, as the United Nations condemned recent clashes that have left over 200 dead.

West Darfur state, the arid region of Sudan bordering Chad, has for the past week been gripped by deadly violence between members of the Massalit community and Arab fighters.

"Three people were shot dead in El Geneina," Regal said, a toll confirmed by local resident Abdelrahman Hussein. It was not immediately clear what provoked the shooting.

Over 200 people have been killed and scores wounded in a week of heavy fighting, initially centered around the town of Krink, before spreading to El Geneina, which lies over 1,100 kilometres (685 miles) west of the capital Khartoum.

On Friday, the UN Security Council condemned the clashes and called for an "immediate cessation of violence" and a "transparent investigation" into those responsible.

The UN stressed "the primary responsibility of state authorities to protect civilians."

The latest violence comes as Sudan grapples with fallout from a coup in October last year led by army chief Abdel Fattah al-Burhan.

The UN said more than 1,000 armed members of the Arab Rizeigat community then swept into the town.

Health facilities and government buildings were attacked or set on fire in the violence, according to the UN.

Witnesses have accused the Janjaweed militia of orchestrating the violence.

Map of Sudan and neighbouring countries.. By (AFP)

The Janjaweed was an Arab militia which gained notoriety for its role in the repression of an ethnic minority rebellion in Darfur in the early 2000s under then autocrat Omar al-Bashir.

Darfur was the scene of a bitter conflict in 2003 when ethnic minority rebels took up arms, complaining of discrimination by Bashir's Arab-dominated government.

Khartoum responded by unleashing the Janjaweed, who were blamed for atrocities including murder, rape, looting and burning villages.

The conflict killed more than 300,000 people and displaced 2.5 million, the UN estimates.

According to rights groups, many of the Janjaweed's members were integrated into the feared paramilitary Rapid Support Forces, commanded by General Mohamed Hamdan Daglo, now de facto deputy leader of Sudan.

Darfur remains awash with weapons and has seen a renewed spike in deadly violence in recent months triggered by disputes mainly over land, livestock and access to water and grazing.