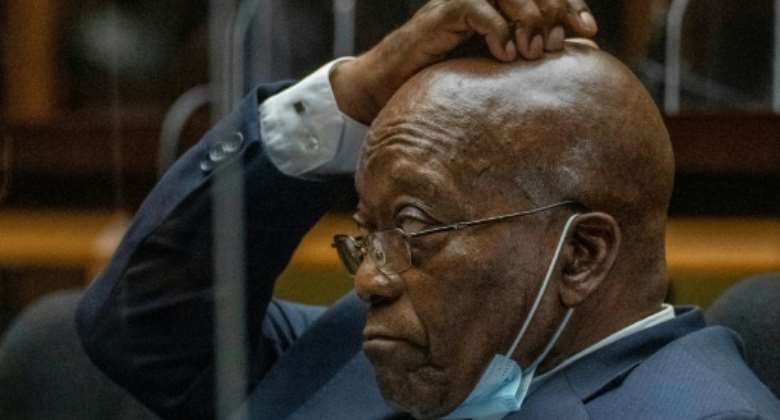 The latest damning report into Jacob Zuma's presidency, released Friday, hands him a "critical" role in the plunder and mismanagement of South Africa's state-owned enterprises during his nine years in office.

A special inquiry filed a fourth volume of the huge report with President Cyril Ramaphosa, detailing Zuma's key role in major corruption through a merging of state, party and private business.

The report has been put together after four years of investigations led by current chief justice Raymond Zondo, revealing how the wealthy Indian-born Gupta brothers became enmeshed at the highest levels of government and the ruling African National Congress (ANC).

"It is clear that from quite early in his first term, (former) president Zuma would do anything that the Guptas wanted him to do for them," said the report.

The latest report focuses on the "capture" of Eskom, the public power utility in Africa's most industrialised economy.

In total, some 14.7 billion rand ($930 million) of Eskom's contracts were improperly awarded to firms linked to the Indian migrant business family.

Zuma's interfered in Eskom executive board affairs, said the report.

The collusion and corruption by the Eskom executives, "with external third parties... was blatant".

"Zuma was a critical player in that plan," it added.

"Central to the Guptas' scheme of state capture was... Zuma who the Guptas must have identified at a very early stage as somebody whose character was such that they could use him against the people of South Africa, his own country and his own government to advance their own business interests".

But his presidency gained a reputation for graft, with cronies influencing government appointments, contracts and state businesses.

"It is also quite clear that during... Zuma's term of office certain decisions which were supposed to be made within government were made outside of government and not with his party, the ANC, but with the Guptas," said the report.

Zondo has recommended that law enforcement agencies investigate further for possible "criminal prosecution of the implicated parties... for their part in facilitating the fraud, corruption and financial misconduct against Eskom and the state".

The report also criticises fraud in social housing and asbestos removal contracts worth $10 million when it was run by ANC grandee Ace Magashule, an ally of Zuma, who has been charged over the affair and suspended by the party.

Zuma is on medical parole after being granted a 15-month jail term for contempt following his refusal to testify before this commission probing financial sleaze under his presidency.

A fifth and final volume of the report is expected by June 15.

Going to the IMF with Ken Ofori-Atta as the lead will yield ...
23 minutes ago