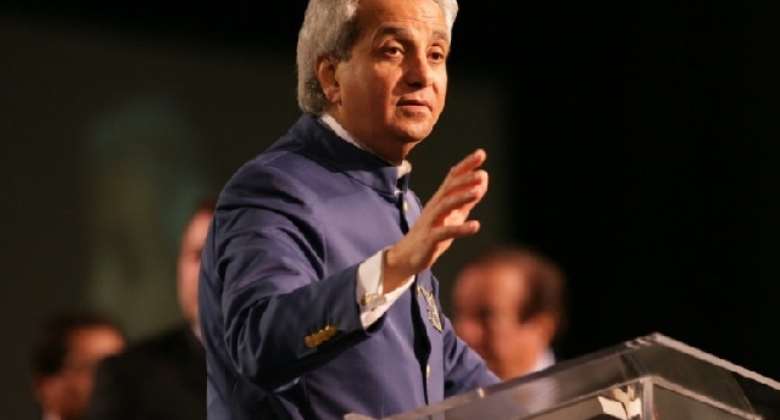 Israeli televangelist Benny Hinn has said it is an offence to God and the Holy Spirit for pastors and preachers to ask their denomination to pay $1,000 for prosperity or miracles, saying he is done with the monetisation of the Gospel.

A repented Benny Hinn said: “The flesh must be broken, must be out of the way; and today, sadly, among a lot of circles, all you hear is: how to build the flesh; it’s a feel-good message”.

“I'm sorry to say prosperity has gone a little crazy and I'm correcting my own theology, and you need to all know it because when I read the Bible now, I don't see the Bible in the same eyes I saw the Bible 20 years ago”, Hinn told an audience in a video, adding: “I don’t want to hurt my friends who I love who believe things I don’t believe anymore.

“I think that hurts the Gospel. So, I’m making this statement for the first time in my life and frankly, I don’t care what people think about me anymore”, Benny Hinn said.

“If I hear one more time: 'Break the back of debt with USD1,000', I'm going to rebuke them," he said, noting: “I think that's buying the Gospel, that's buying the blessing, that's grieving the Holy Spirit. That's about all I will say”, he noted.

“If you are not giving because you love Jesus, don't bother giving. I think giving has become such a gimmick, it's making me sick to my stomach and I’ve been sick for a while, too, I just couldn’t say it, and, now, the lid is off. I’ve had it”, he told the audience.

In a subsequent one-on-one interview with Charisma CEO Stephen Strang, Hinn said ‘prosperity gospel’ was nothing but manipulation and gimmickry.

“Let me first start by saying the change in my own heart and life to do with that [prosperity gospel] has really nothing to do with what my critics have said about me, it has to do with my own heart before the Lord.

“The last two years, Steve, I’ve become very close to the Lord because of one reason: because I want to please Him [more] than ever in my life, to be honest with you. I want to end well when I go to glory, I want to smile and I‘ve told Him so many times. I said: Dear Jesus I’ve believed you enough, I’ve disappointed you enough in my past life, I do not want that for me today or tomorrow”.

“So, the prosperity issue is not fully the main thing on my list; it’s on the list but it’s not the main one. I just simply want to obey the Lord in everything He says, not just that, and, so, as I have been in my Bible way more than most people would realise, I mean, truly, I’ve almost shut the world out – and I mean the world, day and night, including now reading my Hebrew Bible in Hebrew because I want to know the Lord’s mind, the prosperity message began to bother me probably about two years ago, I just wasn’t free to talk about it. I was afraid because I did not want to hurt my friends or people”.

“And what began to bother me is: where is Jesus in the message, where is the Lord in all this, where is the Gospel in all this? And I began to notice that most of the people that minister the message were not focusing on the Gospel, they were not focusing on loving the Lord Jesus; this is why we preach; this is why we minister. It’s our love for the Lord that comes across with whatever we say. And Steve, you’ve known me a long time. When I began, I began for one reason: I adored my master; then, for a period in my life when the ministry was growing, I became distracted – quite simple. My love never changed. I just became distracted and I don’t want to get into that”, Hinn confessed.

“Today, I’m 67 years old, I’m thinking about: how am I going to finish? And what will I leave behind for the next generation? How will they view me? I want them to view me as one who preaches the cross. I do not want to be known for prosperity [gospel]. I want to be known [as] someone who preached the cross of Jesus, salvation, one who teaches on the Holy Spirit, one who teaches on the anointing and the power of God, one who focuses on that, not on money, not on prosperity. That’s not my calling, it’s never been my calling.

“Yea, people have used me to raise money for their ministries. You know I was a pastor for many years and evangelist for longer than that but now my heart is changing, in fact, not only is it changing, it has changed totally in many ways about many things, so, number one: I don’t want anyone to think or believe that I am changing because of my critics; it has nothing to do with anyone, period, including my nephew, including anyone else out there who may think that they brought the change in me; no no no no; that’s not true, it’s my relationship with the Lord and only that – nothing more, nothing less”, he added.

“Number two, it’s about the Lord: we must bring the message back, bring the balance back. So, in my meetings, when I would watch people – and I usually had other people raise the funds in the morning – this is something that happened in the past, I’m not talking about recent; recently I don’t even allow it. But in the past, when they would ask people to give a USD1,000 or whatever amount, Steve, 80 per cent of the people who came down, they did not even give it, they just came down, I don’t know why they came down but they came down, and what they were saying to them was not biblical”, he noted.

“I did not have, at that time, the boldness and the courage to say: ‘Look, stop that!’ Today, I’m sorry [but] I cannot allow that or will I ever allow that or will I myself do it, period, even though I did in the past because it’s manipulation, it’s gimmickry to tell someone you give a USD1,000 and you’ll get a hundredfold”, he denounced.

“What if they don’t get that hundredfold? And most do not. What happens to their walk with the Lord and their faith? Think about that – the damage, the questions. I do not want to be accused of [convincing] someone to bring a USD1,000 and it didn’t happen. No. Never again.

“… Today, the thing that I have to make clear is number one: I believe the Bible, I believe God wants to bless His people, I believe that He wants us to succeed in life, absolutely. But the focus must be Him, the Gospel, not our greed, not what we want back for it, not I’m giving so I can get it back a hundredfold and all that stuff”, he added.