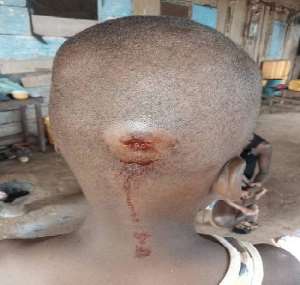 A man in his late 30s has brutally assaulted his 8-year-old son at Essaman, a suburb of Sekondi /Takoradi in the Western Region.

The father, Emmanuel Edusei, used a stick to hit the back of the son’s head.

According to her, they have seen the father on several occasions assaulting the young boy for no reason.

She adds that they saw him with a stick the day before the incident and suspected him to be habouring another agenda “and our suspicion was confirmed the next day”.

“We live in the same house with them. This man keeps assaulting his son whenever he got the opportunity. We were here yesterday when we saw him dragging the small boy to his room. He was very angry because he claims the boy did not sleep in the house. We were all pleading with him to take it easy with him but before we realized, he had gone for a stick and used it to hit the back of the head of his son. The boy is badly injured and we have decided to take care of him”, a neighbor, Helena Quinoo indicated.

Pictures available to Connect FM reveal how bad the situation of the small boy is. Deep cuts could be seen at the back of his head with blood oozing all over. Some of the neighbors have since taken custody of the young boy.

According to them, the father has gradually developed a deep hatred for the young boy to the extent that he assaults him at the least provocation.

“We currently don't know where the mother of the boy is, all we know is that the father has been raising him alone. Whenever we approach him about his attitude towards his son, all he tells us is that we will understand later,” she added.

Another neighbour, Jonathan, narrates that Emmanuel Edusei sometimes locks up his son in the room for days for no reason. He explains that the father is currently unemployed and has been blaming his son for his predicaments.

“He is currently not working. He keeps saying that his son is a wizard and has caused all the challenges he is currently facing in life. When he is angry, he locks up his son in the room for days and beat him till we break into his room and save the young boy,” he added.

The neighbours have started healing the wounds of the young boy.

The case has since been reported to the police.