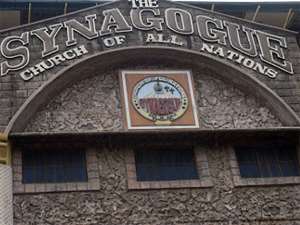 Fire has reportedly destroyed parts of the Synagogue Church of All Nations, (SCOAN).

The tomb shelter of the late founder of Prophet Temitope Joshua, in Ikotun, Lagos State has also been destroyed.

She said, “It is confirmed that a section around the tomb of the late pastor TB Joshua caught fire. A shelter was built to cover the tomb because it is an open place, so, it was the shelter that caught fire. But we were able to curtail it and it did not spread beyond where it started. We have yet to identify the cause of the fire.”

The Acting Coordinator, National Emergency Management Agency, Ibrahim Farinloye, who also confirmed the incident, told newsmen that the fire had been put out.

He said, “The incident happened at a building belonging to the late pastor. The late pastor usually went there to relax and meditate. Federal fire service officials moved in to put out the fire.”

Meanwhile, The Synagogue Church of All Nations (SCOAN) yesterday said it had yet to ascertain the cause of the fire outbreak on Wednesday, at its old site Agodo, Egbe; two kilometres from SCOAN headquarters cathedral.

It said the fire had since been put out and assured the public that a review was ongoing, stating that there was no need for panic or “unnecessary speculations.”

In a statement, SCOAN said the fire affected a general-purpose store while there were no injuries or lives lost.

The statement was titled 'FIRE OUTBREAK AT SYNAGOGUE CHURCH OF ALL NATIONS (SCOAN) OLD SITE: WE ARE ON TOP OF THE SITUATION'.

It reads: “On the evening Wednesday, April 27, 2022, a fire outbreak occurred at the old site of the SCOAN, located at Agodo, Egbe; about two kilometres from SCOAN headquarters cathedral.

“The fire outbreak was from a general-purpose store at the old site and has been successfully put out through the efforts of the ministry's emergency response team, with no injuries whatsoever and no lives lost.

“Currently, the cause of the fire is unknown. To this end, we wish to assure our esteemed members, partners and friends of the ministry that we are on top of the situation. There is no need for panic and unnecessary speculations.

“As sons and daughters of love, we shall continually uphold the assurances of our Lord and Savior, Jesus Christ, who has conquered the world for our sakes.”

It urged the public to “Please, disregard any alarmist news aimed at creating panic amongst the church members in particular and the general public.

“We are no longer slaves to fear. We are children of God. Emmanuel!”