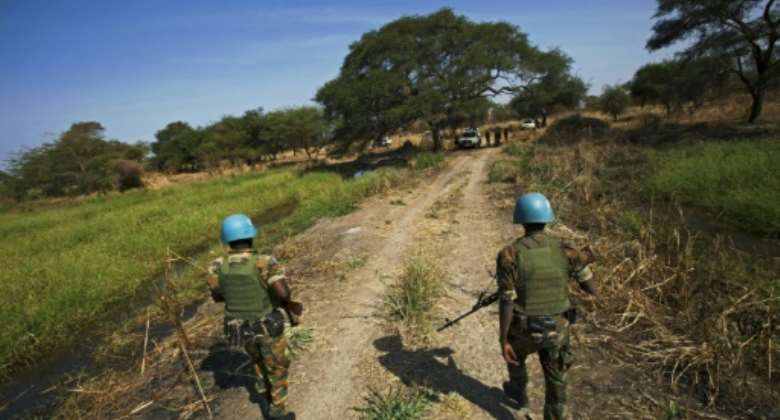 Until last year, Ethiopian forces accounted for the vast majority of the around 4,000-member UN peacekeeping mission in disputed Abyei. By ALBERT GONZALEZ FARRAN (AFP/File)

Ethiopian peacekeepers from the war-torn Tigray region, who are refusing to return home, are victims of rebel "propaganda", the defence ministry said, following the soldiers' request for political asylum in Sudan.

More than 500 UN peacekeepers from Tigray who were deployed to Abyei, a disputed border region between Sudan and South Sudan, have asked Khartoum for asylum, citing fears for their safety.

The 17-month conflict between Prime Minister Abiy Ahmed's government and the Tigray People's Liberation Front (TPLF) has widened ethnic fissures in the country, with Tigrayan officers accused of colluding with the rebels and ordinary Tigrayans subjected to arbitrary arrests in Addis Ababa.

In a statement issued late Wednesday, the defence ministry accused the TPLF of inciting defections among Tigrayan peacekeepers "by sowing the lie that they will be imprisoned if they return home".

It also said some peacekeepers had refused to return because they feared the TPLF "and not because of hatred of their country".

But the Tigrayan peacekeepers interviewed by AFP all said they were worried about their safety, with one senior officer saying that other returnees had been arrested or killed in Ethiopia.

The conflict has divided the multi-ethnic nation, with Tigray under what the United Nations says is a de facto blockade.

Essential services including banking and communications have been shut for several months while aid trickles in at a snail's pace after both sides agreed to a conditional humanitarian truce in late March.

In a statement sent to AFP late Wednesday, the group of 528 peacekeepers still in Abyei said they wanted to "be a voice against the siege which is killing our people".

"We don't want to continue working for a regime that is massacring and slaughtering our people," the statement said.

The war in northern Ethiopia broke out in November 2020, when Abiy sent troops into Tigray in response to what he said were rebel attacks on army camps.

An early victory against the TPLF -- which ruled Ethiopia for nearly 30 years until 2018 -- was followed by a rebel comeback last June, when they recovered control of Tigray and expanded into neighbouring regions.