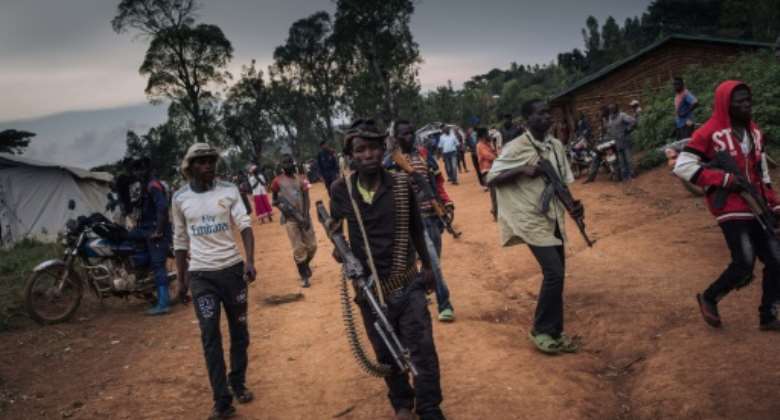 Over the past year, more than 2,500 civilians have been killed in two eastern provinces of the DR Congo placed under siege. By ALEXIS HUGUET (AFP/File)

The Democratic Republic of Congo imposed a "state of siege" a year ago to try to restore order in two violence-wracked provinces, but the civilian death toll has nearly doubled and lawmakers are voicing growing anger.

Between April 2020 and May 2021, 1,374 people were killed, said analyst Reagan Miviri from the respected Kivu Security Tracker (KST) that monitors the bloodshed.

The attacks are blamed mainly on the notorious rebel groups Allied Democratic Forces (ADF) and the Cooperative for the Development of the Congo (CODECO), which terrorise North-Kivu and Ituri.

They were put under a state of siege on May 6 last year, a stringent measure that gave the army and police full powers to run the administration and wage war on the hundred or so armed groups that have rampaged through eastern Congo for more than a quarter of a century.

A hundred or so armed groups have rampaged through eastern Congo for more than a quarter of a century. By ALEXIS HUGUET (AFP/File)

For Prime Minister Jean-Michel Sama Lukonde, the siege and the army operations have "reduced the zone of action for negative forces".

As a result, he told France's RFI radio station on Tuesday, the authorities are considering altering the area covered by the siege, "given that the exactions take place in specific areas".

The siege has seen the army lead multiple offensives against rebel strongholds.

KST has recorded some 600 clashes in the last year, compared with 400 over the previous 12 months.

"ADF rebels have been hunted down at numerous bastions from where training, indoctrination and attacks against army and civilians' positions were organised," said captain Anthony Mualushayi, army spokesman for the Beni region of North-Kivu.

In late November, the Ugandan army entered the DR Congo to join in the hunt for the ADF, considered by the Islamic State extremist group as its central African affiliate, and accused of massacres in Uganda during the 1990s and recent jihadist attacks there.

But the army's optimism is not shared by all.

North-Kivu and Ituri provinces were put under a state of siege last May. By ALEXIS HUGUET (AFP/File)

"Instead of containing the violence, the operations by the Congolese and Ugandan armies have had the effect of broadening the sphere of actions by the ADF which now runs from the Ugandan border to the west of national highway 4," said Miviri.

Besides their usual zone in the Beni region, the ADF has also massacred civilians in the territories of Djugu and Irumu in Ituri.

Militiamen from CODECO, a political-religious sect, have attacked people already displaced by the killings as well as humanitarian workers.

And rebels from the M23 movement, which had been routed in 2013, have regrouped to take on the army in North-Kivu.

"It's been three months since the strikes by the Ugandan and Congolese armed forces against ADF positions stopped," Beni resident Jules Masumbuko told AFP.

Armed groups have taken advantage of the lull to "reorganise themselves and take back areas they have lost, because there's a problem with numbers within the Congolese army," said Miviri.

The army says more than 20,000 troops have been deployed to the volatile eastern zones.

The siege has seen the army lead multiple offensives against rebel strongholds. By ALEXIS HUGUET (AFP/File)

The army also stands accused of abusing their powers by silencing all dissent.

Over the year, 13 pro-democracy activists and two singers have faced stiff punishment from military tribunals for opposing the siege, while at least one lawmaker has spent several days in detention.

Five members from North-Kivu and Ituri have tabled a motion at the national assembly to end the state of siege.

To clearly underscore their opposition to repeated extensions of the measure by the assembly, lawmakers from both provinces boycott debates on such renewals.

"It is not necessary to keep soldiers in charge of our provinces with this mixed result after a year," said Beni MP Gregoire Kiro, accusing military chiefs of prioritising tax collection over security issues.