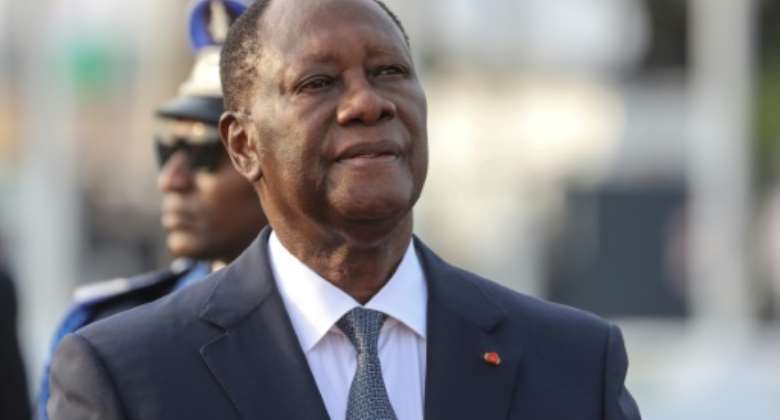 A wily political veteran, Ouattara is keeping everyone guessing about his plans. By Ludovic MARIN (AFP)

Ivory Coast's 80-year-old president, Alassane Ouattara, has given no sign of wanting to hand over the reins following a closely-scrutinised cabinet reshuffle and the appointment of a deputy.

Analysts have been ruminating over last Tuesday's big announcement for signs of Ouattara's plans -- a crucial issue in a country that carries the scars of political turbulence.

Nearly two years ago, as elections loomed, Ouattara signalled he would retire from politics after spending 10 years at the helm.

But those plans were thrown into reverse when his anointed successor, then prime minister Amadou Gon Coulibaly, suddenly died.

In response, Ouattara dusted off a bid for a third presidential term, sparking bitter criticism that he was circumventing term limits under the constitution. Scores died in election-related violence.

But last week's appointments suggest Ouattara wants to retain a close grip on power and quash speculation that he is grooming a successor, analysts say.

He named a little-known technocrat, regional central banker Tiemoko Meyliet Kone, 73, as vice president, filling a seat that had been vacant for nearly two years.

And he reappointed Prime Minister Patrick Achi to head a reshuffled cabinet that is also being streamlined under an economy drive.

"The prime message... is that he's adopted a position to fight for 2025," when the next presidential elections are due, said political analyst Rodrigue Kone.

The West African state, a major producer of coffee and cocoa, has been ruled by the same generation of politicians for decades -- a ballet of on-again, off-again rivalries and alliances.

Ouattara came to power in 2011 after a brief but bloody conflict sparked by the refusal of his then-rival, Laurent Gbagbo, to accept election defeat. Several thousand people died and the country split along north-south lines.

Clashes along ethnic lines broke out in the town of Toumodi during the October 2020 elections. By SIA KAMBOU (AFP)

This division may have a bearing on Ouattara's appointments, said Kone, the analyst. The new vice president hails from the north, while the returning prime minister has his political bastion in the south.

Ouattara has also teasingly spoken of other possible contenders for succession -- in an interview with French media in February, he said he was thinking of "half a dozen names".

Several loyal Ouattara figures have returned to the reshuffled government, such as Kandia Camara as minister of foreign affairs, and Tene Birahima Ouattara -- the president's brother -- at defence.

"The president is leaving all options open concerning speculation about his successors," said the analyst Kone.

Ouattara has also tightened his grip on the ruling RHDP, promoting a historic ally to a top position.

A diplomat said it was crucial for Ouattara to keep everyone off-balance about his plans.

Former president Laurent Gbagbo has been brought in to help heal the rift of his 2020 election campaign. By Sia KAMBOU (AFP)

"If he gives the slightest indication that he wants to step down, he could lose market value," the source commented.

Some of the fog of uncertainty about Ouattara's plans may be dispelled later this year, when a bill is put to the National Assembly to limit the maximum age for presidential candidates to 75.

By the time of the next elections in 2025, Ouattara will be 83. The two other rivals of his generation, former presidents Gbagbo and Henri Konan Bedie, will be 80 and 91 respectively.

All three would be disqualified from running if the law is passed.