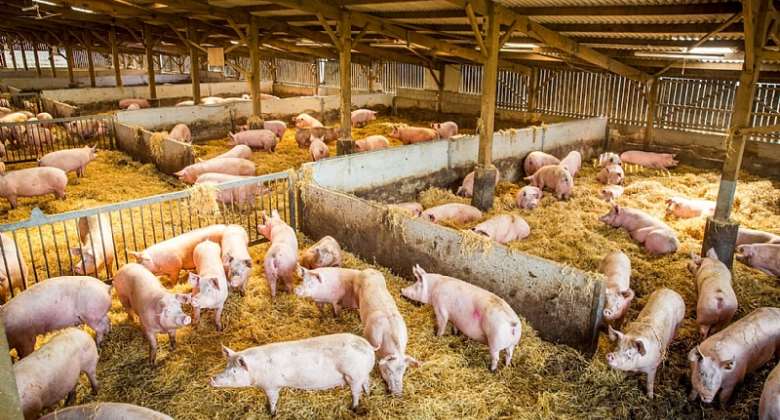 The report, The Hidden Health Impacts of Industrial Livestock Systems, exposes how governments around the world are turning a blind eye to the public health toll of factory farming as well as the suffering of billions of farmed animals. The report builds on the concept of five pathways “through which food systems negatively affect our health” as outlined by the World Health Organization (WHO) in their 2021 report Food Systems Delivering Better Health .

It further shows how these negative health impacts will only get worse as the demand for meat continues to grow. For instance, by 2030, meat consumption is projected to grow by 30% in Africa [ii] . This skyrocketing demand has billions of stressed animals mutilated and confined to cramped and barren cages or pens for their whole lives. Over seventy percent of the 80 billion land animals farmed globally are raised and slaughtered within cruel industrial livestock production systems annually.

Dr. Victor Yamo, Farming Campaigns Manager, World Animal Protection said, “The emergence of Antimicrobial Resistance in Africa is driven by weak regulatory capacity of government agencies charged with the responsibility of managing the production, registration, distribution and utilization of these products leading to the rampant misuse of these products. For instance, the law requires that antimicrobial drugs be purchased against a prescription, but our farmers can purchase the same over the counter without a prescription.”

He adds that “The situation is further compounded by the inadequate extension personnel on the ground to advice the farming community on innovative and good animal welfare, animal husbandry and animal health practices such as good biosecurity, proper nutrition, housing, stocking densities, hygiene & sanitation and infection, prevention & control (IPC) strategies which would render the need for use of antimicrobial drugs unnecessary.”

The report highlights that three-quarters of the world’s antibiotics are used in farmed animals, either to prevent them getting sick, promote fast growth or treat disease – a practice driving the emergence of superbugs (antimicrobial resistant bacteria), which leaves us less able to fight infections. New research has found that 1.27 million people die each year from superbugs [iii] , and it is estimated that by 2050 this will be the leading cause of death globally [iv] . On top of this threat, industrial livestock production systems squash animals into tightly packed sheds, risking disease like swine flu or bird flu that can jump to humans.

Animals cruelly packed in such shades are often immensely stressed [v] leaving them prone to infection by bacteria or parasites that can cause foodborne illness in humans, such as Salmonella. An estimated 35% of all foodborne diseases globally are linked to meat, dairy or eggs [vi] , which is costing lower income countries billions of dollars annually in lost productivity and medical expenses [vii] .

Dr. Lian Thomas, Scientist at the International Livestock Research Institute (ILRI) in Nairobi said: “Industrial livestock farming requires the production of a high density of genetically homogenous animals, which leads to the quick spread of diseases – many of which can directly affect human health. The health of farmed animals and their environment must be a high priority for the public health sector. Sustainable food systems which promote good animal health and welfare, and environmental protection, will directly protect human health.”

Systemic shifts are needed to deliver the biggest health gains for our population. Some of those include re-orientating subsidies away from factory farming towards humane and sustainable practices, improving affordability of plant-based foods, and providing transition support for farmers no longer wishing to engage in factory farming.

Jacqueline Mills, Head of Farming, at World Animal Protection, said: “Industrial Livestock Production systems are not only cruel to the animals that they produce but are also making us sick. On the surface, the meat, eggs, fish and dairy products produced by these systems seem cheap, but they are costing us our health and our governments trillions of dollars each year to mop up the damage they cause.”

“We need to break the cycle of suffering of the animals in our food system. The food industry needs to embrace a humane and sustainable future where farmed animals are kept in genuinely high welfare systems where they can have good lives. Now is the time for governments to focus on better health outcomes for farmed animals, people and the planet. We need a moratorium on Industrial Livestock Production systems."

African governments should recognize the inter-connectivity between public health and planetary impacts of industrialized farming systems and commit to stopping the support for these systems. The commitment in the form of a moratorium on industrial livestock production systems should be within the National Climate Action Plans (known as Nationally Determined Contributions (NDCs)) in recognition of these systems contribution to climate impacts. As well as this, the African governments must develop and implement national One Health, One Welfare action plans and national Antimicrobial Resistance (AMR) plans that recognize the health impacts of industrialized livestock and restrict its growth.

Hottest Photo Reports
Catch up with all the political quotes from our politicians.
Advertise here
More from Business Features
ModernGhana Links
4 out of 5 Africans say recent developments in African technology has changed how they view the continent
British magazine The Economist stresses Ghanaians' disillusionment with the government's financial measures
AfrikPage.com one of first English and French online newspapers in Ghana
TOP STORIES

Akufo-Addo angry, dissatisfied over slow pace of work on Bol...
39 minutes ago