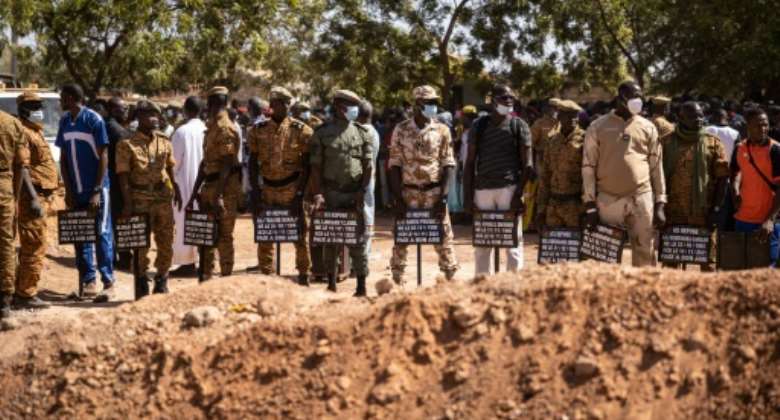 Jihadist toll: Military officials at Gounghin cemetery in Ouagadougou last November, bearing signs with the names of soldiers killed in an attack the week before. By OLYMPIA DE MAISMONT (AFP)

Burkina Faso has unveiled a new tactic in its fight against a bloody jihadist insurgency -- "dialogue" between community leaders and local fighters who have fallen into extremism.

The initiative, announced earlier this month by the junta that seized power in January, marks a shift from security-centered efforts to end the country's long-running conflict.

Over the past six years, more than 2,000 people have died, many of them members of the security forces, and at least 1.8 million people have fled their homes.

Under an olive-branch scheme, "local dialogue committees" are bringing community leaders and local jihadists together for talks.

There is a strict condition to the initiative -- there is a bar on men deemed to have ties to Al-Qaeda or the so-called Islamic State (IS), the two groups that initiated the insurgency.

The scheme stems from the realisation that most of the jihadists in Burkina today are not members of the two big transnational groups, said Francois Zoungrana, an anti-jihadist commander in the gendarmerie.

"Currently, the enemy mainly comprises Burkinabe citizens... who are very often invisible and mixed into the population," he said.

Around 10 "endogenous" jihadist groups have developed in Burkina Faso over the past six years that do not have have visible ties to Al-Qaeda or the IS, according to Burkinabe intelligence.

These groups are "a kind of metastasis of the terrorist phenomenon," said Drissa Traore, a professor and political analysis.

Their presence "means the authorities have to explore other options instead of the military-only one."

Sahel security experts often say that many jihadist recruits are lost or unemployed young men, who are lured by the promise of money and a mission.

The minister for national reconciliation, Yero Boly, said the dialogue was conceived after young fighters had asked for talks with traditional, religious and tribal leaders.

"The path they have taken is a path with no future, that's what young fighters have been saying," Boly said.

"They have weapons and are in armed groups which attack their own villages."

As a result, "dialogue became established and is following its course," he said.

He stressed that important red lines remain in place.

The state still rules out "directly dialoguing with terrorist leaders, and negotiating with them even more so" and the army "is continuing its work" in anti-jihadist operations, he said.

The scale of the talks are unclear but a security source said "contacts" are already underway between fighters and community leaders in the violence-torn north and east.

On April 20, say local inhabitants, combatants lifted a two-month old blockade on Djibo, capital of the northern province of Soum, allowing an army convoy of a hundred trucks of food and various goods to reached the city.

Traore and others sounded a note of caution about the hazy scope of the talks at this stage -- and whether the initative had a future.

Those engaging in the dialogue are only a "small minority" of active jihadists, said Traore.

"How many of these young people want to put down their arms?" he asked. "And are they speaking in their own name or for armed groups?"

Moussa Diallo, member of a team coordinating youth in the Sahel, also pointed to the stumbling block about young fighters who were desperate to return to a normal life.

"Everyone asks how you can live alongside people who have killed your parents and then stolen all your possessions," he observed.

He also recalled that there had already been "informal dialogues led by local communities" in the past.

These initiatives resulted only in "a brief lull," which ended when commitments were not followed through, Diallo said.

"In the end, these people take up arms again and become even more violent,' he said.

Going to the IMF with Ken Ofori-Atta leading will yield no r...
28 minutes ago