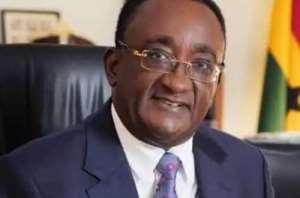 A former Head of the Monitoring Unit of the Forestry Commission, Charles Owusu has chided government for failing to settle debts owed fertilizer contractors after distributing fertilizers to farmers in the country.

Over two years now government is said to be owing fertilizer contractors of which farmers are feeling the impact.

Farmers across the country especially those under the government flagship project Planting for Food and Jobs have been complaining bitterly over the shortage of fertilizers in this farming season.

Charles Owusu has therefore asked government not to attribute the shortage of the fertilizer to Russian –Ukraine war but rather settle the debts owed suppliers.

"Now Ghanaians cannot purchase food crops produced from our own country and the impact of the shortage would be hugely be felt.

“We are all aware of how our soils have gradually become infertile and need fertilizers to improve their nutrients for farming purposes but here is the case farmers cannot have access to fertilizers,” he noted.

“Where is the success story of Planting for Food and Jobs when we don’t have fertilizer for farming,” he quizzes.

REACTIONS FROM THE AGRIC MINISTRY

The Press Secretary for the Minister for Food and Agriculture, Ridwan Issah Alhassan reacting to the situation said one cannot blame the Agric Minister for not paying the debts.

“We should not make things look like we are deliberating keeping the money for these contractors but the issue is, funds have not been released for payment,” he explained.

He revealed that fifty percent of these contractors have been paid while the ministry is making efforts to pay the rest.

Recent checks conducted by this reporter has revealed that government of Ghana owes fertilizer suppliers an estimated debt of 436 million Ghana cedis after supplying farmers with fertilizers for 2020 and 2021 farming seasons.

According to some of the companies this reporter spoke to, they said government only paid them part of the money with 86 million Ghana cedis still in arrears since 2020.

In 2021, after supplying farmers with fertilizers for the farming season, government failed to settle these companies’ which has accumulated to 350 million Ghana Cedis debt.

Currently, some fertilizer suppliers who have stock available are planning to sell to neighboring countries to clear their debts since the implementing agency, the Ministry of Agric is not showing any readiness to settle outstanding debts.