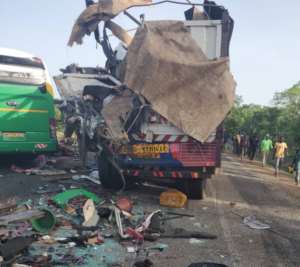 A fatal accident has left four persons dead at Kwame-Kwasi, a community on the Bole-Bamboi stretch in the Savannah Region.

Eye witnesses say the driver of the ESP Bus was over speeding but failed in an attempt to overtake the Mali bound trailer killing the four onboard.

The Bole District Police Commander, DSP Benjamin Buxton who confirmed the accident to press men, said the remaining passengers who sustained various degrees of injury, have been rushed to the Bamboi Polyclinic for medical attention while the bodies of the deceased have been deposited at the Wenchi hospital morgue.

The ESP Bus has been towed to the Tinga police station.

Meanwhile, police personnel have been dispatched to the scene to direct traffic.