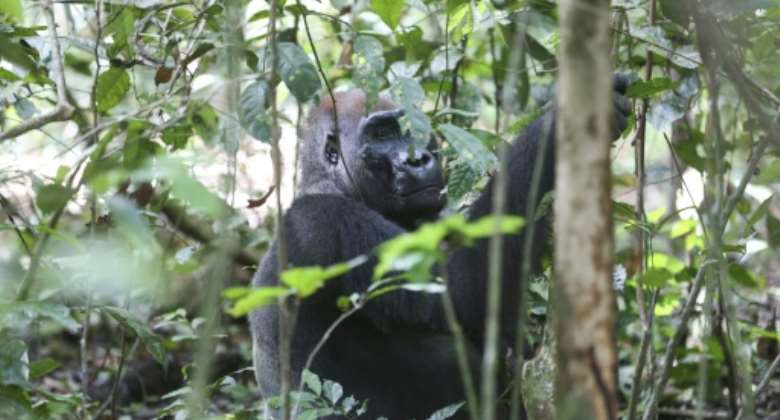 Public observation of Gabon's gorillas is resuming at Gabon's Loanga National Park after two years of closure due to Covid. By Steeve JORDAN (AFP)

Around a bend on a narrow trail that runs deep into the forest of Gabon's Loango national park, Kamaya comes into view. The huge silverback gorilla coolly watches visitors arrive, then goes back to his meal.

Perched on a strong branch, the 150-kilo (330-pound) beast greedily pulls more leaves from the tree to his mouth with a slow but powerful movement before lumbering down the trunk. Soon he dozes off calmly.

After two years of a total shutdown due to the Covid-19 pandemic, the executive secretary of the National Parks Agency (ANPN) has decided to resume public observations of Gabon's gorillas, hoping the iconic species will serve as a "loss leader" to boost niche tourism.

The western gorilla population is estimated at 360,000 individuals across six central African countries, about a quarter of them in Gabon. By Steeve JORDAN (AFP)

That Kamaya and his family of about 10 individuals are so used to humans is the outcome of long labours by a team of trackers and scientists who also collect data.

They work to win funds to protect a species threatened with extinction and to attract foreign visitors.

Spending one hour with Kamaya and his group costs 300,000 CFA francs, (450 euros, almost 500 dollars), on top of charges for access to the site and accommodation.

Loango Park, which covers more than 155,000 hectares (380,000 acres) of the densely forested country, offers ample reward for a 4-5 hour road journey from Port-Gentil, the second city, followed by the track and a final stage by boat.

Though steep, the price is much lower than that paid to see the mountain gorillas in Uganda or Rwanda. It also generates income to manage protected areas that provide a safe place for the animals.

"Tourism is a beneficial conservation strategy for gorillas," says Koro Vogt, manager of the Gorilla Loango project. The mountain gorillas of Rwanda and Uganda were almost extinct before funds from tourism helped to double their numbers in three decades, attaining a population of about 1,000 individuals today.

Protected areas such as Loango are theoretically safe for animals, but are home to only 20 percent of the great apes in Gabon. By Steeve JORDAN (AFP)

The western gorillas are far more numerous. Their total population is estimated at 360,000 individuals across six central African countries, about a quarter of them in Gabon. The Loango park is home to nearly 1,500 gorillas, some 280 kilometres (175 miles) south of the capital Libreville.

However, scientific studies by the Max Planck Institute for Evolutionary Anthropology, which specialises in great apes, indicate that the number of western gorillas is falling by three percent each year due to the destruction of habitat, poaching and disease.

These threats are heightened by increased access to remote areas occupied by gorillas, the bush meat trade, corruption and lack of law enforcement.

Protected areas such as Loango, which are theoretically perfectly safe for animals, are home to only about 20 percent of the great apes in Gabon.

"To safeguard the gorillas, our guards patrol the national parks to reduce illegal activities and catch poachers," says Christian Tchemambela, executive secretary of the ANPN.

It takes years for humans to gain the gorillas' trust. By Steeve JORDAN (AFP)

"This species emblematic of Gabon is also a strong draw for foreign visitors. The development of ecotourism is at the heart of our strategy," he adds. From June 2016 until the beginning of 2020, 845 tourists were able to observe the gorillas on site.

A ray of sunlight pierces the treetops and shines on Mokebo, a 15-year-old female, and the little one she is carrying on her back. Not yet a year old, Etchutchuku stirs, glances at the few people watching him, and hides shyly behind his mother.

Close by, a nearly adult male, Waka, approaches the observers out of curiosity. He is unafraid, shows no signs of aggression and settles peacefully a few metres (feet) away.

"This process is very long, it takes years to gain their trust and we are not sure of succeeding," says eco-guide Hermann Landry.

The park authorities are looking to Gabon's great apes to draw in tourists and help develop ecotourism. By Steeve JORDAN (AFP)

"You have to follow them every day, all year round, relentlessly. Sometimes you lose track of them for several days and that's serious, because they can regain their natural fear of humans," adds Landry, a former poacher who declares that he "fell in love" with gorillas and conservation work.

During an initial habituation phase, gorillas are afraid of humans and run away when approached. In the next phase, they stop fleeing but may react with aggressive charges.

In the final phase, they react calmly and continue their activities without concern about the human presence.

Today, Gabon is counting on the gorillas to attract new visitors.

There are two family groups in the country accustomed to humans, one in Loango, the other in the Moukalaba Doudou National Park 600 kilometres (370 miles) south of Libreville. However, tourist infrastructure is still almost non-existent.