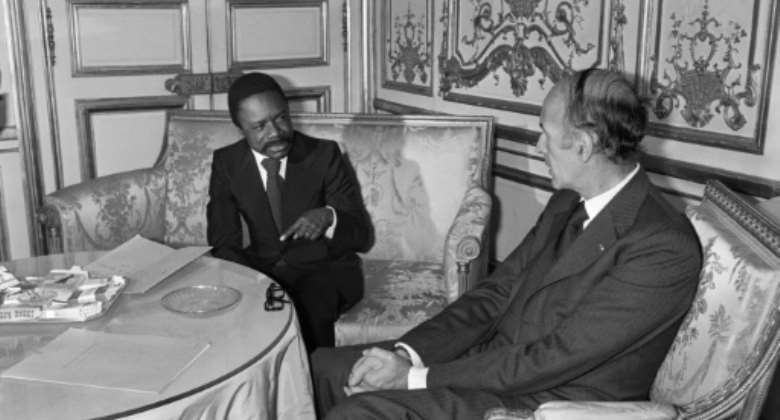 Omar Bongo, pictured with former French president Valery Giscard d'Estaing during a visit to Paris in 1974. By - (AFP)

Four children of Gabon's late president Omar Bongo have been charged in France with embezzlement and corruption, a source familiar with the case told AFP Thursday.

The siblings -- Grace, Betty, Arthur and Hermine Bongo, all in their 50s -- were charged between March 25 and April 5 by financial investigators.

Investigators believe members of the Bongo dynasty -- including Omar, his son Ali, 64, who is now president of Gabon, and his daughter Pascaline, 66 -- knowingly benefited from a fraudulently-acquired real estate empire worth at least 85 million euros ($93 million).

All four of Omar Bongo's children who have now been charged denied any knowledge of the allegedly fraudulent origins of the assets, the source said.

They told investigators they had received the properties -- apartments in the well-heeled 15th and 16th districts of Paris -- as gifts from their father between 1995 and 2004.

Grace Bongo's lawyer Elise Arfi said that it was "scandalous" that her client had been charged 25 years after acquiring the properties in question.

A further 14 people are under investigation, including relatives of President Denis Sassou Nguesso of Congo as well as several French individuals, among them a lawyer, a notary and a manager of a real-estate holding company.

"This process is now showing the extent to which French properties could only be fraudulently obtained with the help of accounting and legal engineers" in France, said William Bourdon, a lawyer for Transparency International France, which is a co-plaintiff in the case.

Omar Bongo, a close French ally, ruled the oil-rich state from 1967 until his death in 2009, when he was succeeded by his son Ali.

He had 54 children, more of whom may also face charges, the source said.

Gabonese presidential spokesman Jessye Ella Ekogha declined to comment on the charges when contacted by AFP.

Akufo-Addo going to IMF is not victory, it's a day of sadnes...
12 minutes ago