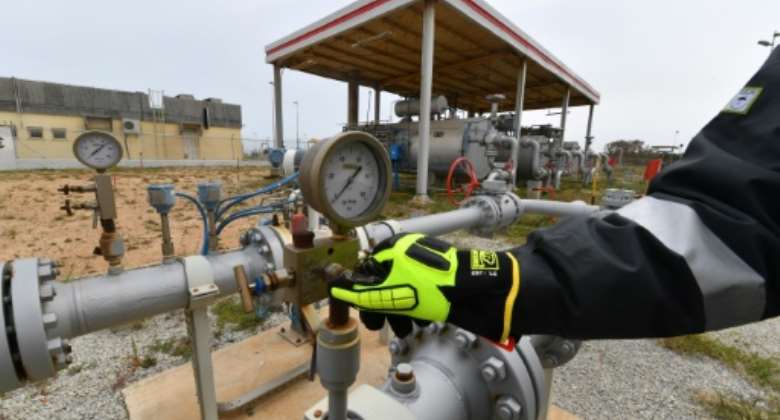 The Transmed pipeline brings gas from Algeria to Italy via this section in Tunisia. By FETHI BELAID (AFP)

Italian ministers on Wednesday signed a deal with Angola to ramp up gas supplies from the southern African country as Italy urgently scrambles to break away from Russian gas over the Ukraine war.

A declaration of intent was signed to develop "new" natural gas ventures and to increase exports to Italy, a statement from the Italian foreign minister announced.

"Today we have reached another important agreement with Angola to increase gas supplies," Foreign Minister Luigi Di Maio said in the statement.

"Italy's commitment to differentiate energy supply sources is confirmed," said Di Maio at the end of a two-and-half-hour long visit to Luanda.

Prime Minister Mario Draghi wants to add Angola and the Congo Republic to a portfolio of suppliers to substitute Russia, which provides about 45 percent of Italian gas.

"We do not want to depend on Russian gas any longer, because economic dependence must not become political subjection," he said in an interview with the Corriere della Sera daily published on Sunday.

"Diversification is possible and can be implemented in a relatively short amount of time -- quicker than we imagined just a month ago," he said.

Draghi was due to go himself but after testing positive for Covid-19, sent Di Maio and Ecological Transition Minister Roberto Cingolani in his place.

Cingolani described the deal as "an important agreement that gives impetus to the partnership between Italy and Angola in the fields of renewables, biofuels, LNG and training in technology and environment".

"This is a race against time to make sure we stock gas and oil for the next winter season," said Francesco Galietti, head of Rome-based consultancy Policy Sonar.

A similar declaration will be signed in the Republic of Congo.

The foray follows the signing of agreements with Algeria and Egypt in recent weeks.

Algeria is currently Italy's second-largest supplier, providing around 30 percent of its consumption.

Draghi announced a deal to boost gas deliveries from Algeria, where he met in April with its President Abdelmadjid Tebboune. By FILIPPO ATTILI (Palazzo Chigi press office/AFP)

ENI said the deal with Algeria's Sonatrach would boost deliveries of gas through the Transmed undersea pipeline by "up to nine billion cubic metres per year" by 2023-24.

Transmed only had spare pipeline capacity of 7.8 billion cubic metres per year in 2021 -- though it has said it is ready to expand.

Italy has also been in talks with Azerbaijan over the expansion of the Trans-Adriatic Pipeline (TAP).

The Egypt accord could result in up to three billion cubic meters of liquefied natural gas (LNG) bound to Europe and Italy in particular this year, ENI said.

Italy is looking into buying or renting two floating storage and regasification units (FSRU) to allow it to import more LNG.

Diversification will not be cheap, warn experts, who foresee extra taxes passed on to businesses and families.

Davide Tabarelli, head of energy think tank Nomisma Energia, said Rome was rightly exploiting the "excellent relationships" that ENI has built up over 69 years in Africa, where it is the sector leader in terms of production and reserves.

Italian energy company ENI is the sector leader in Africa in terms of production and reserves. By Filippo MONTEFORTE (AFP)

But the idea of replacing Russian gas "in the short term" was "fanciful", he told AFP. "It will take at least two or three years."

The government said it expects to get the floating regasification units into place within 18 months.

It has also talked of kick-starting stalled projects for two onshore regasification plants, which would take some four years to build.

Italy is one of Europe's biggest guzzlers of gas, which currently represents 42 percent of its energy consumption, and it imports 95 percent of the gas it uses.

The government hopes to reduce that by accelerating the investment in renewables and has vowed to cut red tape on wind and solar farms.

His rallying cry was met with some grumbling in a country feeling the effects of global heating, which science shows is driven by human burning of fossil fuels.

Undeterred, the government is readying so-called "operation thermostat", which could see the public sector turn down heating in schools and offices by one degree, and the equivalent for air conditioning in the summer.

The rule would apply to private households and companies too, though it would be difficult to police.

It could save some four billion metric cubes of natural gas a year -- or around 14 percent of the total gas imported from Russia, according to La Stampa newspaper.