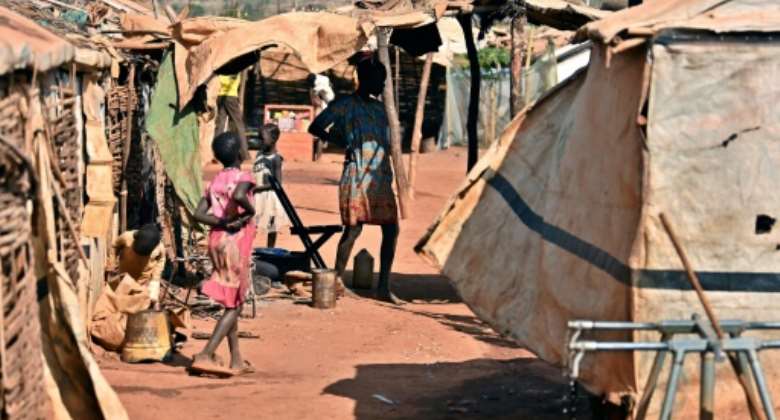 The UN envoy said two- thirds of the population or almost nine million people -- including 4.6 million children -- will need aid to survive. By TONY KARUMBA (AFP/File)

The UN's envoy to South Sudan warned on Thursday that almost nine million people will be in need of aid this year as the fragile country grapples with a surge in violence between armed factions and a food crisis.

Clashes have flared anew in the world's youngest nation despite a pledge by President Salva Kiir and his rival, Vice President Riek Machar, to silence their guns and strive towards implementing key provisions of a 2018 peace pact.

Nicholas Haysom, the head of the UN Mission in South Sudan (UNMISS), called on the leaders to step up efforts to quell the violence and urged the international community to channel in more assistance.

"This year two-thirds of the population or almost nine million people -- 4.6 million of which are children -- will need aid to survive," Haysom told reporters in the capital Juba.

"Food insecurity will be widespread. And that is worsening because of climate change, conflict and displacement."

Haysom said he was "discouraged by the resurgence of sub-national violence," highlighting the plight of thousands of people driven from their homes by fighting that erupted last week between pro-Kiir and pro-Machar forces in oil-rich Unity State.

The clashes in Leer County sent 14,000 people fleeing, according to the local authorities, while the UN also voiced alarm about reports of sexual violence, looting and destruction of property.

Traditionally a pro-Machar stronghold, Leer was an epicentre of a humanitarian crisis that emerged out of the 2013-2018 civil war, ravaged by violence as well as a famine.

South Sudan has been wracked by instability since independence in 2011 and is still struggling to draw a line under the war that claimed the lives of almost 400,000 people.

Haysom said the upsurge in fighting was increasing the number of people in need of aid and adding to woes from expected flooding in many areas in the coming months.

"Continued and sufficient funding is urgently needed to stop the worst from happening."

Kiir and Machar earlier this month agreed on the creation of a unified armed forces command -- a key component of the peace deal -- and Haysom said he hoped it would open a window of opportunity to address the problems the country faces.

"With 10 months left in the transitional period, I am now strongly encouraging all parties to channel renewed momentum towards completing the remaining benchmarks of the peace agreement and to reach an agreement as to when the elections should be held," Haysom said.

A two-year transition period laid down in the peace accord is due to end in February 2023, with elections due to be held 60 days beforehand.

"If you ask me if the country is ready for elections right now, I would say no... because the technical conditions have not been put in place," he said, such as the creation of an election management body and an electoral law.

"They cannot be held if this violence is rampant throughout the country," Haysom added, calling for a "greater level of commitment to peaceful coexistence across the country."

Franklin Cudjoe back calls for probe into Covid-19 expenditu...
19 minutes ago

North East: One killed in clash between two communities
19 minutes ago