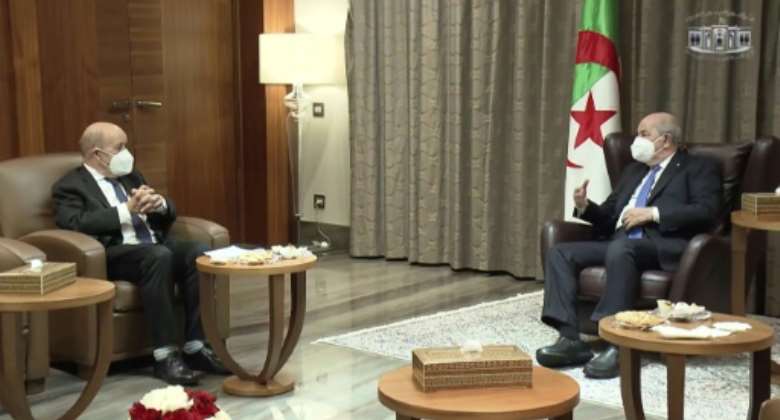 France's top diplomat Jean-Yves Le Drian said cooperation with Algeria is "indispensible" for regional stability, during a visit to the former French colony.

"We are facing regional challenges, first and foremost terrorism," he said late Wednesday after meeting his counterpart Ramtane Lamamra and President Abdelmadjid Tebboune.

"So our cooperation on security and for the stabilisation of the region is indispensable in the Mediterranean and in Africa."

Le Drian stressed the urgency of "the evolution of the situation in the Sahel and the need to relaunch the transition process in Libya".

France and Algeria have been attempting to improve their ties after a diplomatic crisis.

Le Drain had visited in December in order to repair the damage and the French ambassador returned in January.

On Wednesday, the foreign minister said Paris and Algiers were working on reviving bilateral relations "essential for each of our two countries and that we wish to maintain over the long term".

He also said Russia's invasion of Ukraine had "major consequences" for energy in Europe and for food security, including in Algeria.

Algeria is a major exporter of natural gas, which covers over 11 percent of Europe's needs, compared to Russia which makes up about 47 percent.

European countries have been trying to ramp up Algerian exports to reduce their reliance on Russia, but experts say the North African country has limited room for manoeuvre, partly due to its own soaring domestic needs.

Algeria did however sign a deal on Monday to boost exports to Italy by the Transmid undersea pipelie.