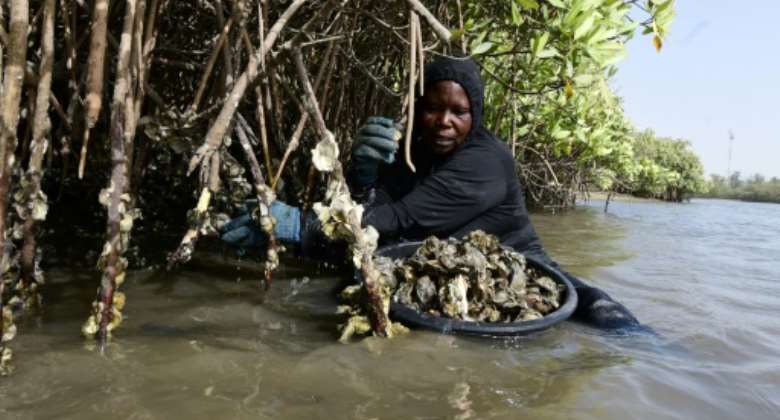 Seynabou Diop is one of thousands of women in Senegal who earn a small living from finding mangrove oysters. By SEYLLOU (AFP)

The mangrove swamp near Joal-Fadiouth, a fishing village in southern Senegal, teems with oysters.

But hunting for shellfish treasure among gnarly tree roots in brackish water is a lot of work.

Thousands of people -- the vast majority of them women -- make a living from oysters in Senegal, usually at a small and informal level.

But experts say the tropical West African state has huge prospects for ramping up oyster output to far greater levels.

"Oyster production is falling short of its potential," said Boubacar Banda Diop, in charge of the oyster sector at Senegal's fisheries ministry.

The possible harvest, in terms of protein and money, could be high, say champions of the oyster.

About 40 percent of Senegal's population of 17 million people live below the poverty line, according to a World Bank metric. In a nation where fish is a traditional staple, the country also suffers from overfishing and food insecurity.

In 2017, farmers plucked about 15,600 tonnes of oysters from Senegal's mangroves, according to the United Nations Food and Agriculture Organization (FAO). They also gathered about 400 tonnes from oyster beds.

By comparison, the world's largest oyster producer China harvests about 3.5 million tonnes per year, according to the French research institute Ifremer.

Senegal's government has a development plan for the oyster industry, while the FAO and the European Union are putting forward ideas for techniques and breeding programmes to enhance production.

Pioneer: Ousmane Fall, left, has started an oyster farm in the Somone lagoon in southern Senegal. By SEYLLOU (AFP)

A small business in the Somone lagoon south of Dakar has already begun to apply some of the project's recommendations.

"We have doubled our production capacity compared to last year, going from three to six tonnes per year," the head of the business, Khadim Tine, told AFP.

But such successes are rare -- and the hurdles for those who want to make the jump from artisanal to industrial-scale farming are daunting.

Mamadou Bakhoum, the head of an association of villages in southern Senegal, said high water salinity caused by climate change meant there were fewer oysters than before.

But, he said, "if people get serious about it, the potential for developing oyster farming is enormous."

The habitat features plants and shrubs growing in shallow semi-salty water, protecting against coastal erosion and nurturing a complex and invaluable ecosystem. Mangroves are already under increasing threat in Senegal, as elsewhere.

Wooden trestles are placed in the swamp with wires hanging between supports just above the waterline.

The environmentally-friendlier way of growing oysters is through wires that dangle from trestles into the swamp water. By SEYLLOU (AFP)

Spats -- strings of oyster larvae that grow into the shellfish -- then begin to develop on the wires.

Selling oysters fresh -- as opposed to cooked, as is usual in Senegal -- could also boost returns for farmers.

Industry figures say that a dozen fresh Senegalese oysters sell for the equivalent of between seven and nine euros ($7.70-8.20).

That's a price that puts fresh oysters way of out of reach for many in the country --- wealthy tourists would be the target market for an expanded industry.

To meet it would problems are cold storage, transport infrastructure and sanitation standards.

Expanding the oyster business to an industrial scale requires systems to monitor water quality, as oyster farms are prone to contamination.