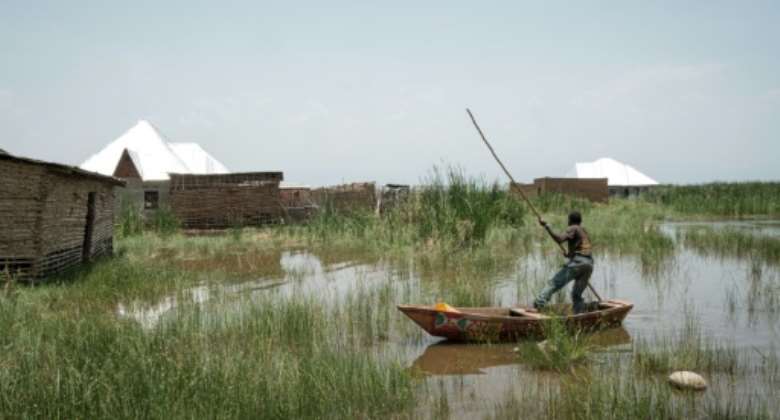 The water levels in Lake Tanganyika remain at highs not seen in decades. By Yasuyoshi CHIBA (AFP)

In her 40 years living by the water's edge, Amissa Irakoze never much feared Lake Tanganyika. Floods were frequent, even lapping at her front door, but eventually they always receded.

She could never have foreseen what happened in April 2020. Returning from working in the fields, Irakoze found her home in northwest Burundi was under the water and her 10 children missing.

"The children were swept away, but some people nearby who could swim used boats to fish them out, and brought them to me." All miraculously survived.

Two years later, the floodwaters have not receded and Africa's second largest lake remains at highs not seen in decades, pushed outward by erratic and extreme rainfall linked to a warming planet.

Irakoze and her family languish in a makeshift camp behind the lakeside city of Gatumba.

Those driven off their land have little to keep them busy, their children passing their time playing in the camp's alleyways.

Missing school: Some 65 percent of those displaced by the lake are children. By Yasuyoshi CHIBA (AFP)

"We used to farm, we used to do jobs that helped us survive. But since we've been here we've done nothing," said Lea Nyabenda, another mother of 10 who arrived at the camp two years ago.

"Life is miserable, and the shelter and lack of food makes me anxious. Sleeping in a place like this when we had a beautiful big house," she said.

Gatumba has grown significantly in recent decades thanks to its proximity to the Democratic Republic of Congo, Burundi's massive neighbour to the west.

Amissa Irakoze and her family languish in a makeshift camp behind the lakeside city of Gatumba. By Yasuyoshi CHIBA (AFP)

As cross-border trade boomed, construction in Gatumba has proceeded at a clip but some new dwellings sprang up on a watery plain where building was prohibited.

Nyabenda's old neighbourhood was one such place.

As the lake rose, her suburb turned into a swamp. Some homes remain intact, but most are watery ruins covered in tall grass.

"This is where my house used to be," said Nyabenda, pausing before a mound of earth and scraps of wood, and pointing out where the bedrooms and living spaces used to be.

"I avoid coming here. I can feel the tension rising."

The neighbourhood has a ghostly emptiness.

Schools and commercial establishments "have been destroyed, there are also crops, plantations that have been flooded," said Geoffrey Kirenga, country director for charity Save the Children.

Map of Burundi. By (AFP)

Some 65 percent of those displaced by the lake are children. Most no longer have access to school or any form of learning, and have started working to support their families.

"Children are getting involved in fishing, which is dangerous. It is unprotected so it exposes them to physical harm," said Kirenga, looking toward the murky lake filled with hippos and crocodiles.

Save the Children expects the situation to worsen as the rainy season begins in Burundi, which the World Bank ranks the world's poorest by gross domestic product (GDP) per capita.

A man makes a fish trap next to makeshift shelters for people displaced by the rising waters. By Yasuyoshi CHIBA (AFP)

Political violence and civil strife drove hundreds of thousands of people from their homes over recent decades in this tiny but densely-populated nation sandwiched between Tanzania, DR Congo and Rwanda.

Burundians are still moving in great numbers but today the driver is not man but nature.

Natural disasters were responsible for nearly 85 percent of the country's 113,000 internally displaced people, according to the International Organization for Migration (IOM).

By some measures, Burundi is among the most vulnerable nations on earth to a changing climate.

Natural disasters were responsible for nearly 85 percent of the country's 113,000 internally displaced people, says the International Organization for Migration. By Yasuyoshi CHIBA (AFP)

According to experts, an increase in annual rainfall -- particularly torrential equatorial downpours -- is feeding the vast lake that runs the length of Burundi's southwestern frontier.

But other factors could also be contributing to its dramatic rise, said Albert Mbonerane, the country's former environment minister, and a champion for the conservation of Tanganyika.

The lake has ebbed and flowed in cycles for generations.

But the amount of trash dumped into rivers feeding the lake has risen sharply and its only outlet -- a waterway running into Congo -- could be blocked and preventing levels from falling, Mbonerane said.

He said there has been no movement in lake height since 2020.

"When I see all the solid waste, everything that is thrown into these rivers... The lake is almost vomiting, as if to say, 'What do you want me to do about it?'" he said.

To the east of Gatumba, the country's largest city Bujumbura also wraps around the lake.

Lea Nyabenda, a mother of 10, arrived at the camp two years ago. By Yasuyoshi CHIBA (AFP)

Plots of land are flooded, and half of a four-lane road that once ran around the shore is underwater.

"Sometimes when we talk about the environment it seems like it's just a story we're telling. But the reality is there," said Mbonerane.