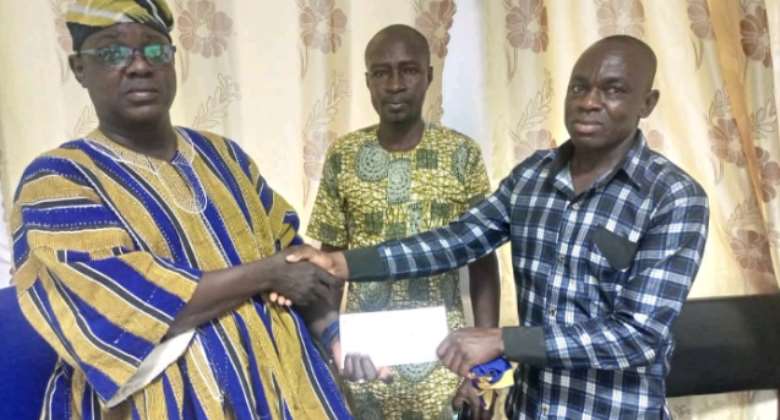 Africa Child Rights and Youth Empowerment Foundation (ACRAYEF), a Non-Governmental Organization established in Damongo in the Savannah Region, has come to the rescue of an ailing woman with a cash donation to help foot her medical bills at the Tamale Teaching Hospital.

The patient who has been identified as Madam Memuna Mbonwura is suffering from Malignant Neoplasm Overlapping Lesion of the Skin.

This unusual overlapping lesion of the skin has made it difficult to carry out her daily activities to fend for her children.

The woman believed to be in her early 70's is a petty trader from a low income earning family in the Savannah Region. She is unable to raise an amount of three thousand four hundred Ghana cedis (Gh¢3,400) to cater for the medical bill.

Her predicament which went viral prompted Africa Child Rights and Youth Empowerment Foundation to come to her rescue with an initial donation of an amount of one thousand five hundred Ghana cedis (Gh¢1,500) to settle her histopathology treatment.

The gesture according to the NGO was part of its support to pay for the first stage of treatment of the woman whose condition is deteriorating each day.

Project Coordinator for ACRAYEF, Mr. Karimu Samiwu who did the presentation, said ACRAYEF will foot the remaining bills for her treatment.

Speaking to this reporter on the sidelines of the cash donation, Mr. Samiwu said the NGO had over the years supported several people in health and education.

He furthered that the NGO which is dedicated to positively changing the lives of the disadvantaged especially stigmatized children and the youth has advanced plans to empower five girls living with disability to generate regular income for themselves.

According to him, the beneficiaries will be trained as seamstresses for a period of one year. He added that all the machines and other tools needed would be provided by ACRAYEF at a cost of eight thousand Ghana cedis (Gh¢8,000.00).

He said some projects undertaken by ACRAYEF included the campaign soothsayers in West Gonja against the killing of perceived spirit children which has yielded the desired results.

He also noted that the organization had provided support in the form of registering children under the National Health Insurance Scheme (NHIS), coordinating and facilitating the medical treatment of a nine-year-old Jacqueline Anthony and a host of other success stories.

He however bemoaned that the lack of funds to care for children with complicated illnesses is a great challenge to the organization.

He, therefore, appealed to the general public and individuals for support and partnership to help better the lives of the needy in their operational zones.

The Head of the Medical Social Works Department of the Tamale Teaching Hospital, Alhaji Braimah Saaka who received the money on behalf of the family of the patient, conveyed words of appreciation to the NGO for the gesture.

He implored them and their partners not to renege in their craving to put smile on the faces of the needy in society.