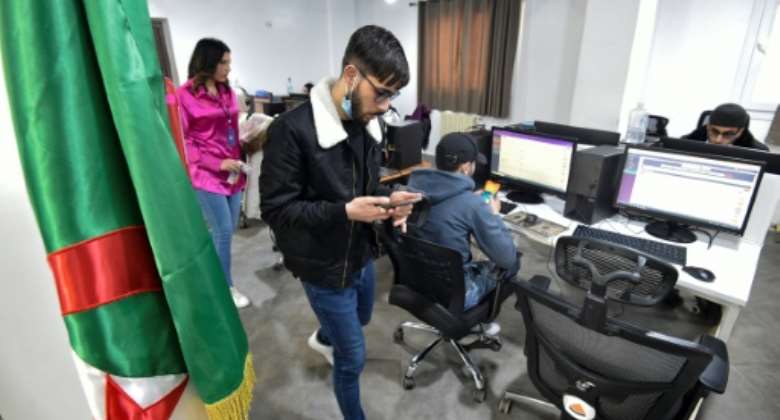 Since launching five years ago, Algerian start-up Yassir has rolled out across the Maghreb region and beyond. By RYAD KRAMDI (AFP)

It's the Algerian start-up that made good: despite the country's notoriously complex business climate, taxi and home-delivery firm Yassir has millions of users and is expanding across Africa.

"We made it our mission to create a model of success that was genuinely, 100-percent Algerian, to develop local talent and show that it's possible to create added value in Algeria," said co-founder Noureddine Tayebi.

Patience has been key as they navigate the country's archaic bureaucracy, the bugbear of investors and one that creates particularly tough terrain for new entrants.

"Bureaucracy is one obstacle that we have to overcome. I can't say it's easy, but you have to deal with it and move forward," Tayebi told AFP.

It's a sign of changing times in Algeria, which in 2020 passed a law on start-ups and created a ministry to promote them.

Since he launched Yassir five years ago with fellow engineer Mehdi Yettou, the company has rolled out across the Maghreb region and beyond.

Late last year they raised some $30 million from American investors, cash they plan to pump into an ambitious expansion plan.

The firm has indirectly created more than 40,000 driver and delivery jobs and its revenue is skyrocketing at up to 40 percent a month.

Tayebi studied in Algiers before earning his doctorate in electronic engineering at Stanford University. That led to a job with Intel -- but after eight years in Silicon Valley, he decided to return home and be part of setting up Yassir. By RYAD KRAMDI (AFP)

Tayebi studied in Algiers before earning his doctorate in electronic engineering at the United States's prestigious Stanford University.

That led to a job with chip manufacturer Intel -- but after eight years in Silicon Valley, he decided to return home and set up Yassir along with Yettou.

The name is a play on the words for "easy" and "drive" in Algerian Arabic.

The pair launched their taxi app in 2017 in Algiers, a capital with a population of four million and desperately lacking public transport.

The firm has branched out into deliveries of fast food and groceries, with sister app Yassir Express. By RYAD KRAMDI (AFP)

The firm has since branched out into deliveries of fast food and groceries, with sister app Yassir Express.

Today Yassir has some four million subscribers in 25 cities across Algeria, neighbouring Morocco and Tunisia, as well as Canada and France.

Tayebi says he now has his sights set on West Africa -- the app already works in Senegal -- and other major markets on the continent such as South Africa, Nigeria and Egypt.

While its growth has been explosive, the business faces tough competition from Uber, Heetch and others.

To succeed, it will need to hire hundreds of highly skilled technicians.

It is already the biggest tech employer in the Maghreb region with some 600 engineers, a figure it wants to triple or even quadruple.

In Algiers, 30 or so young call centre operators are on hand to deal with around 6,000 orders a day.

"The average delivery time for meals is 30 minutes," said Wissem, who runs the call centre.

Tayebi also wants to provide an online payment system -- a rarity in Algeria, where customers pay cash on delivery.

"Most of the population in Algeria and across Africa don't have bank accounts -- not because there's no banking system, but because people don't trust it," Tayebi said.

In Algiers, 30 or so young call centre operators are on hand to deal with around 6,000 orders a day. By RYAD KRAMDI (AFP)

He hopes to change that by capitalising on the trust the company has among its growing customer base.

"That's the strength of our model and what sets us apart, particularly from Uber," he said.

It also means the firm needs to keep a squeaky-clean image.

One Yassir taxi driver told AFP he had been given training in communication before being hired.

Tayebi said there was "a rigorous process for selecting drivers".

"We verify their police records, training and education. There's even a psychological interview."

It's all part of a business for which he has set ambitious targets.

"The goal is to create the biggest tech company not just in Africa but in the world," Tayebi said.

"To get there, you need to be in lots of markets."