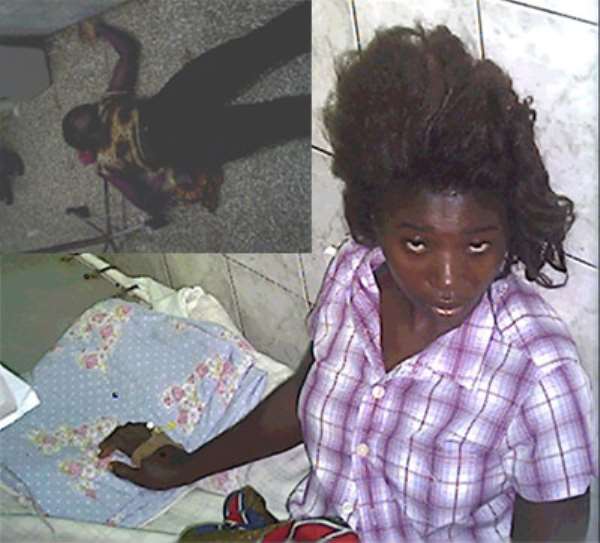 Ghanaians Debate A British Study Once a major supplier of slaves, with some 20 million people transported to America in the 18th century alone, Ghana is now grappling with a modern debate on the problem of domestic workers who campaigners say are no better than slaves.

The debate is around the army of rural children who work in Ghanaian cities - providing hard labour as domestic helps, but also in restaurants and small commercial enterprises across the country. They are mostly bought from their desperate families.

Amina, one such village child, was bought from her family for $40 some years ago by a trader specialising in 'placing' children. Then aged 13, she was re-sold for $60 to work as a domestic help.

She wakes at 3 a.m. every morning and is the last to go to bed, does all the chores, does not go to school and is paid nothing. But Amina does not believe she is a slave. In fact she vehemently denies this: "I am not a slave, I am a domestic worker."

Joyce, aged 15, was sold by her aunt to a restaurant owner for $20. Joyce and three other girls combine waitressing, cooking and cleaning from dawn till midnight seven days a week, with no days off except when they are seriously ill. The restaurant owner and her husband beat the girls frequently for speaking to clients and accepting tips. Even though Joyce admits that she is unhappy, she too denies that she is a slave and says that she has no plans to escape.

But to Kevin Bales, professor at the University of Surrey in Britain and author of Disposable People: New Slavery in the Global Economy, Amina and Joyce are nothing but modern-day slaves. For Bales, slavery exists when someone is unpaid, stripped of their basic right of self-determination and are held under a threat of violence.

"Slavery is about one person completely controlling another using violence and then exploiting them economically, paying them nothing," says Bales. "One of the problems with slavery today is that most people think it disappeared a long time ago," he adds, estimating there are 27 million slaves worldwide, based on statistics compiled by the Geneva-based International Labour Organisation.

"Slavery today shares with the slavery of the past the essentials of violence and exploitation, but today it is not a legal institution, it is not a key part of any country's economy, nor is it completely based on race or ethnicity. Slavery today has two key characteristics that make it very different the past: slaves today are cheap and they are disposable," says Bales.

He estimates that in the 19th century a slave in the American South cost the equivalent of $40,000 in modern money. The average slave today costs about $100, and includes men, women and children who "can be found in every country of the world. Enslaved domestic workers have been found and freed in London and Paris and the US. The important point is that slaves constitute a vast workforce supporting the global economy we all depend upon."

According to the UN Working Group on Contemporary Forms of Slavery, domestic labour can be slavery "whenever there is control over another's life, coercion or restriction of movement".

Simon Baba, founder of the Domestic Workers Union of Ghana, agrees: "Yes domestic slavery exists. People do not go into it as a profession. It is the last resort of the deprived and very desperate. Sadly, the majority of house helps do not think they are slaves because the situation they find themselves in is better than the lives they had previously."

In Ghana - as in other developing countries - many domestic helps come from rural communities. Unpredictable harvests and low agricultural prices, combined with large families, make rural life difficult. According to the government's Ghana Statistical Service, rural families of eight or nine earn on average just $100 a year, compared to an urban household's $360 annually. Dr Akosi Perbi, a historian at the University of Ghana, thinks it is difficult to compare the old and new slavery: "It is true people become house helps because of extreme poverty but the fact that house helps themselves see their situation as an improvement makes the idea of new slavery academic by definition."

The practice is endorsed by most Ghanaians, including women's rights campaigners who lobbied for the eradication of the traditional Trokosi, system where young girls were offered to local priests as bonded slaves.

One such Lagos-based lawyer and women's rights campaigner has a domestic worker who doubles up as nanny, cook, gardener and cleaner. The girl is a distant relative who was delivered to the lawyer in exchange for a sack of rice and wax cloth given to her impoverished mother. Plans to send her to a dress-making school never materialised.

The lawyer, who campaigned to abolish Trokosi defends her actions: "I don't give her money because she is too young and ignorant. Furthermore she is not very bright and that is why she does not go to school."

Akua Agyeman, a trader from the Ashanti region north-west of Accra who has helped many urban middle-class families to get house helps from her village Mampongten, says, "Helping people to get a better standard of living is never slavery." "There is no law in Ghana that sees house helps as slaves," says Perbi. "Fundamental human rights abuse is the nearest accusation advocates of abolition can cite. But it is difficult for the government to take drastic measures against such abuses since the house helps themselves will not voice such abuses for fear of losing their jobs."

An official at the Commission on Human Rights and Administrative Justices - a governmental body responsible for investigating and trying human rights abuse in Ghana - admits that they do get some cases of human rights abuses of house helps which are then investigated by the Department of Social Welfare. However, "the processes can be so long that many do not follow up and it is difficult to trace them".

The situation may change this year. Ghana is a member of the Economic Community of West African States (ECOWAS), which adopted an action plan in December on human trafficking in the region. The plan includes setting up new police units to combat trafficking, introducing protection for victims, raising public awareness that trafficking is a crime and discouraging those who might exploit victims of trafficking - including child domestics.