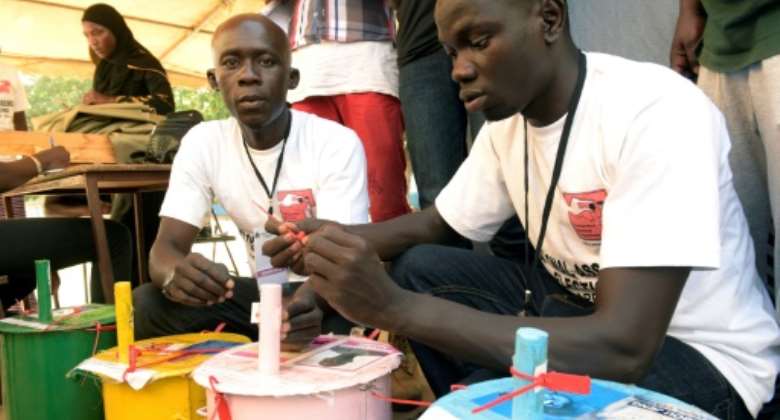 Voting entails placing a marble in an urn with a picture of the voter's preferred candidate -- a system designed to help people who are illiterate. By SEYLLOU (AFP)

Gambians vote for lawmakers on Saturday in legislative elections that should consolidate a young democracy and may see President Adama Barrow strengthen his power after winning re-election last year.

Voters in the tiny and impoverished West African state will renew the unicameral National Assembly's 58 seats for a five-year term.

The single-round vote will choose 53 lawmakers, while Barrow -- serving a second five-year term after last December's electoral victory -- will name the five others, including the parliament's president.

Polling stations are due to open at 8:00 am (0800 GMT) and close at 5:00 pm. An uneventful month of campaigning concluded on Thursday evening and results are expected on Sunday.

Voting for a new constitution -- seen as essential by The Gambia's international partners to strengthen its democracy and limit the president's powers -- will be a key task for the new legislature.

The Gambia is the smallest country in continental Africa. By afp (AFP)

He promised to introduce constitutional change by the end of his term, but in September 2020 the outgoing parliament rejected a draft constitution limiting the president to two terms.

Barrow's supporters opposed the retroactive nature of the provision, which would have prevented the head of state from running again in 2026.

The president's National People's Party, created in 2020 after the break-up of the coalition that brought Barrow to power, is pushing for a parliamentary majority.

The United Democratic Party, the opposition formation which dominates the current chamber, is led by Ousainou Darboe, an unsuccessful challenger to Barrow in last December's presidential election.

The opposition and a civil society official have accused Barrow of illegally supporting his party's candidates by using state resources during a national campaign tour.

The tour was officially aimed at sounding out the public's needs.

An English-speaking enclave of two million people surrounded by Senegal that is continental Africa's smallest country, The Gambia is among the world's 20 least developed states, according to the United Nations.

The country's unique voting system sees voters place a marble into a short pipe that feeds into a canister bearing the colours and a picture of each candidate -- a method introduced due to a high illiteracy rate.