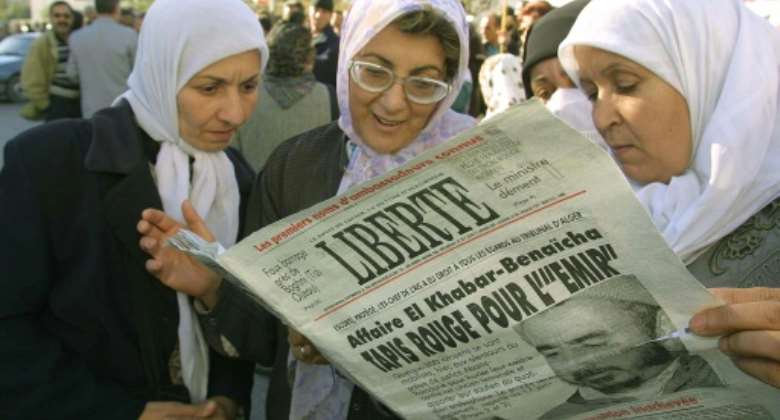 Women in Algiers read the independent Algerian daily "Liberte" on January 11, 2001 -- the paper called itself "a reference for all viewpoints". By (AFP/File)

Algeria's French-language newspaper Liberte will run its final edition next week, the newspaper announced Thursday, criticising the decision by its owner, the country's richest man.

"After 30 years in existence, Liberte is being extinguished," it said in an editorial.

The closure adds to an already difficult climate for journalism in Algeria, which is ranked one of the world's worst countries for press freedom.

Liberte's final press run will occur next Thursday, said the paper whose motto is: "The right to know and the duty to inform."

"In just a few days, newspaper vendors, readers, advertisers and the institutions of the republic will be orphaned by a newspaper that had made its name as a reference for all viewpoints," it wrote.

Algerian intellectuals and public figures had signed a petition urging its owner Issad Rebrab to change his mind, but to no avail.

An appeal by the newspaper's journalists also fell on deaf ears.

They had written Sunday that they did not understand why the newspaper was to be closed.

"The publishing company still has sufficient financial resources to allow it to continue to exist," they wrote.

Forbes reported Thursday that Rebrab and his family "are the world's second-richest Arabs, worth $5.1 billion."

Rebrab is the founder of Cevital, which owns one of the world's biggest sugar refineries.

Liberte's closure is "a victory for silence over speech and for violence over debate", Algerian novelist Kamel Daoud wrote Thursday in the newspaper.

Algerian media went through something of a golden age after protests against the country's one-party system in 1988, but several titles have closed since the turn of the millennium, mostly due to falling sales and advertising revenue.

Several journalists are in prison or facing trial, notably for defamation of political figures or because of social media posts.

The country ranks 146th out of 180 on the Reporters Without Borders (RSF) Press Freedom Index.