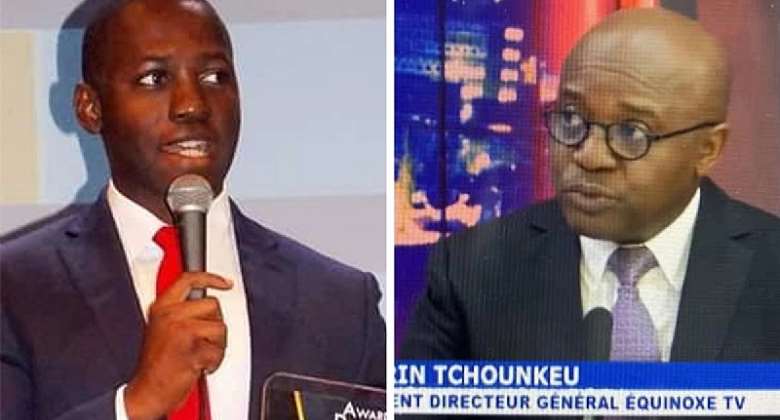 Dakar, April 6, 2022 — Cameroon’s state media regulator should immediately reverse its suspension of journalists working with the privately owned broadcaster Equinoxe TV, and ensure that the outlet can operate freely, the Committee to Protect Journalists said Wednesday.

On April 1, the National Communication Council media regulator announced that Equinoxe TV CEO Séverin Tchounkeu and editor-in-chief and presenter Cédrick Noufele were both suspended from working as journalists for one month, and that the outlet’s “Droit de Réponse” (“Right of Reply”) program was barred from airing during that time, according to press reports and a statement by the NCC.

A person close to Equinoxe TV’s top management, who spoke to CPJ on the condition they not be named out of fear of reprisal, said the outlet planned to challenge the regulator’s decision in court this week.

“Cameroonian authorities should immediately allow Equinoxe TV CEO Séverin Tchounkeu and editor Cédrick Noufele to resume their work, and must stop attempts to censor content about matters of public interest,” said Angela Quintal, CPJ’s Africa program coordinator, in New York. “The country’s media regulator should encourage a diversity of views instead of trying to police speech, and should ensure that Equinoxe TV can air its programming freely.”

On February 28, Noufele hosted a panel discussion on “Right of Reply” about a nationwide teachers’ strike, according to the NCC statement, which accused him of failing to properly supervise the discussion that was “likely to lead to the amplification of a potentially explosive social demand.”

In a letter dated March 18, and subsequently published by local media outlets, Littoral Region Governor Samuel Dieudonné Ivaha Diboua accused Equinoxe TV of “repeated incitement to popular revolt” and said the station had “an outrageously aggressive editorial line for years.” In that letter, Diboua threatened to take legal action against the station for alleged incitement.

On March 21, Tchounkeu appeared on a show on Equinoxe TV, which CPJ reviewed, during which he mocked grammatical errors in Diboua’s letter and suggested that Nji had written it. Also in the broadcast, Noufele denied any wrongdoing in hosting that panel discussion.

In its statement, the NCC cited the February 28 and March 21 programs for allegedly “broadcasting unfounded, insinuating and offensive statements,” and ordered the journalists and “Right of Reply” to be suspended for one month.

CPJ called Nji and contacted him via messaging app, and also called and emailed Diboua’s office for comment, but did not receive any replies. When CPJ called the NCC for comment, President Joseph Chebonkeng Kalabubsu referred CPJ to the regulator’s statement.