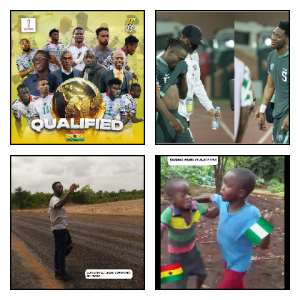 To wit: there are evil years.

And exactly, this year seem to be the devilish year in the life of every patriotic Nigerian.

Following on the heels of masterclass display the Black Stars exhibited at the world cup qualification two-leg playoff that pipped the Super Green Eagles of Nigeria to represent at the global football showpiece in Qatar, another more whipping of a kind in a video has surfaced on social media with Nigeria still being on the losing side to Ghana.

It's about a fight between two young boys - a Ghanaian and a Nigerian.

The viral video which accompanies this writeup is an open air free show fisticuffs that ensued between Alata Yaw and Kwadwo Ghana near the Goka roundabout when all kids in the Bono town gathered to welcome the road constructors with cheers as Goka saw its town roads first tarred.

The two boys; Alata Yaw is a son of a Nigerian merchant resident in Goka, whilst Kwadwo Ghana is a descendant of the greatest Bono warrior of Frafra origin, Atarepanga.

The Nigerian kid is fed on Eba (a gari made food), and the Ghana boy ate his normal Fufu staple made of plantain or cocoyam and cassava and served with soup.

As the gari made food increase in size with addition of water, so has Alata Yaw outgrown in size compared to his age mates. Kwadwo Ghana looks dwarfish when he stands in front of the Eba eating stoutly built foreigner.

In the neighborhood where Alata Yaw lives, he intimidates his peers with his stature and muscles, and none dared picked a fight with him, fearing the obvious.

But not so with Kwadwo Ghana. His blood knows not what retreat is, as was his great great grand father who stood on his grounds against besieging and ambushing soldiers during the many Bono wars waged against Ashanti invaders. He alone, he conquered thousands of enemy soldiers.

Sunday, 3rd April, 2022, marks a historical day in the life of Goka and the people of Jaman North, as the ancient town of pilgrims pride benefited from President Akuffo Addo's Year of Roads flagship project.

All the sons and daughters of Goka including yours truly who had their foots not hurt dressed our best and walked on the new blackened streets.

To spice the jubilation, Alata Yaw who was a threat to his playing mates got a beatings of his life when he first slapped Kwadwo Ghana for the latter's crime only being happy and mistakenly stepping on the former's foot in his attempt to force his way to see the men that were happily singing hymnals inside Mr. Adu Takyi Drugstore, a short distant from the roundabout.

All those gathered agreed not to separate the boys. They knew the history of the two. And indeed, Kwadwo Ghana proved his family accolade, handing a hefty slap to Alata Yaw who ceased truce with tears without anyone's intervention to separate the fight.

First it was the defeat in Abiola Stadium in Abuja that sent the Nigerian football fans insane and rioting.

And as Ghanaians plan on the means to join all football enthusiasts to spend the latter part of 2022 (November and December) in the sweltering Gulf State, we've still got another victory to celebrate on our screens.

Please watch the video attached for your amusement.🇬🇭🤸🏻‍♂️🤓