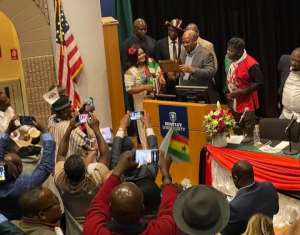 The National Democratic Congress Chapter in the United States of America (NDC-USA), led by the Chairman Maame Aba Dadzie, threw a rapturous welcome for H.E. John Dramani Mahama, the former President of the Republic of Ghana and Flagbearer of the NDC in the 2020 election.

The event was held at Bentley University, Adamian Academic Center.

President Mahama and his entourage also met President of Bentley University, Dr. LaBrent Chrite, and his cabinet members while touring their trade center. The historic encounter was on the sidelines of the former President's Key Note Address at the annual Africa Business Conference organized by the Harvard Business School.

In his address to the party faithful, President Mahama touched on his concerns about the judicial decay engulfing the country under the current administration with the alleged many lopsided rulings by the Supreme Court.

He further suggested a critical need for the Supreme Court Chief Justice to do a thorough judicial review to turnaround the unfortunate tide.

H.E also touched on the ailing economy that he attributed to the current administration's irresponsible and reckless borrowing spree and management style.

Among the areas he cited was how Akufo-Addo government collateralized Getfund, a situation the younger generation will have to live with and bear the financial implications.

In answering questions from a New Yorker about why he appears to be so quiet about insults by some Ghanaians, especially Hon. Kennedy Adjapong, although his government has done better in managing the economy of Ghana than almost all his predecessors, former President Mahama smiled and cited two age-old adages that, "You don't wrestle with a pig, for you would only get dirty with mud. If a madman takes your clothes while you bathe and you go after him, no one would be able to tell the difference between the two of you."

In wrapping up, he urged unity among the party faithful and the need for a collective effort in rescuing Ghana in 2024 from the current abysmal NPP government.

The leadership of NDC-USA led by Chairman Madam Maame Aba Dadzie thanked President Mahama and the delegation for honouring the chapter with their visit.

She pledged to strengthen the pillars further and enhance the party's growth in the United States in preparation for the general elections in 2024.

The event concluded with a standing ovation amidst drumming and cheers for the former President. The party faithful are calling on President Mahama to lead the party back to power in 2024 to save the Ghana from the untold hardship this current administration supervised by Akufo-Addo and Bawumia.