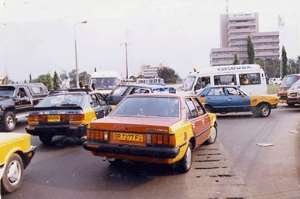 A Death Trap Waiting For A Catch: - Change and Attitudes It's a shame that for over 30 years the so-called Golden Triangle highway between the three top major cities in Ghana (Accra, Kumasi, Takoradi), planned since Nkrumah's days, has not bee taken seriously. Many contractors, and friends of contractors in the government, have built mansions from our taxpayer money and loans. Who is responsible for Ghana?

Traffic congestion can drive one crazy. In the USA, some drivers carry their guns in cars, and some have shot at others who may cross them. Driving in traffic in Los Angeles and San Francisco, California, can be a challenge, but a pleasure compared to what I have experienced driving through Accra since my arrival back home. I had not driven on Ghana roads during many return trips in the three decades I lived in America. Were it not for my special calm innate composure and driving skills of over 30 years, including driving in New York City and Mexico, I'd be unable to drive through Accra since my return home early July 2004. How would foreigners see us as Ghanaians after driving on our city roads? Are we crazy or what??

Please don't get offended with my use of the word “crazy”, because where I used to live in America crazy is a soft word and does not mean insane. I know this is not America, but I noticed the kids don't mind some few American English here (smile). It all depends on the context. We must look crazy to any foreigners! Yes, and we must learn to see things from other peoples' viewpoints if we are sincere about being part of the modern world and global competitive market and platform. President Kufuor may wish for a Golden Age of Business, but this may not mean much if we are only thinking of ourselves, our fufu and banku.

This writer has not been locally active in Ghanaian affairs since our 1992 debut with the Ghana Democratic Republican Party (GDRP), and for a few years after. However, those who follow my writings on the Internet will know I have been still keenly active and interested in Ghana's modernization and socio-organizational development. If you ask my opinion, I can tell you that it seems to me Ghanaians are still stuck in first gear of societal development. I was very positively impressed during my short in November 2003. However, impressions are always relative. I was comparing with my last trip before the 1992 elections. Time will not allow a complete socio-cultural and organizational analysis of our Ghana as I find it now. My short stay since I returned this time confirms some facts:

1. Our personnel in the lower management levels seem to lack guidance as to which direction to move their workers. There are very skilled workers. My experienced confirms this in managing and directing some projects here in the last 4 years, even before my final move.

2. The skilled workers don't have the experience or quality control standards to move to the next phase of development. Almost every project needs close supervision. Since return, I have had to destroy and rebuild some portions of a real estate project because it was not done to specs.

3. We seem to accept mediocrity. “Eha dee saa ooo” (as for Ghana that's how it is”). For example, a welder would leave spot marks on tiles, a painter will leave spots on electrical sockets and plates, and they will only clean them when asked to. I had to instruct the workers at Abose Okai to remove from the ground debris used on my car to maintain cleanliness. Their answer was that all garbage is cleaned in the mornings in the area. This mindset is carried throughout Ghana.

4. Most of Ghana is still stuck on old ideas and mindset, ways of doing things as done in Britain and Europe in pre-colonial days. Lack of exposure to more modern American ways let them sit on the same old ways. Many locally manufactured items, from mirrors to tools, have not seen any improvement since the writer was a child in the 1950s. Can you imagine half a century without any change in the ways things are done?

5. Ghanaians, as I have experienced, are not excessively resistive to change, but are afraid to venture. As such we have our designers, engineers, and of course the managers and directors, who still think only of roads and other designs with open gutters. These open gutters are the breeding places for mosquitoes and many malaria diseases and deaths. Yes, in the year of our Lord 2004, we still have these antiquated and ridiculous ideas of traffic round-about on our streets, and open gutter designs! Why! Executives try to save money, or siphon money, and our designers and managers still can only look at the old textbooks written in the 1930s. Our numerous Directors, Chief Directors, Chief Executives, seem to have no clue as to how to move forward. Or is it due to selfish greed?

Change – Why Round-Abouts? Any field of society, and of knowledge, especially technology and engineering, keeps changing. Nature is always changing. Humans must change to adapt to nature's changes, as an Akan proverb depicts: “mmmere dane a, won so wo dane wo ho” (when times change you change yourself also). With technological changes we have changed the way business is done, made life simpler, distances appear shorter through modern communication and transportation, and cheaper to enjoy life. We are all subject to modernization and change. If Round-about were the most optimal way to control and manage traffic, the one great nation that has more than 50% of all the cars on the globe would be using them by now. I am talking about the USA which was reported a few years ago to have more than 100 million of the estimated 200 million registered vehicles in the entire world. California is the most populated state of the 50 states in the USA, with over 35 million populations. They have more vehicles on the road than any other state in America. Los Angeles, one city metro area, has more cars than the whole Ghana. Yet there are no Round-abouts in California. So who knows better how to plan, design, and construct roads and manage traffic? California, Britain or Ghana? You answer where our leaders should look for modernization of road construction.

- the stinky gutters that are breeding mosquitoes,

- the crazy practice of burning thrash and weeds in the city, and

- the lack of sensitivity and responsibility of personnel of the water, electricity, and other utility companies to the needs of customers. The topic I chose as my number one topic is the chaotic cities and environments, congested and seemingly unplanned roads and vehicle transportation systems we have. There is a total neglect of our cities that seem so obvious when one drives through our cities. Those of us who can must, as a duty to our nation that gave us an opportunity, let our leaders be aware now, and not next year. Granted some accolades in peace keeping, from an external viewpoint, as a nation, Ghana is treading on the narrow path of being looked on as a chaotic nation with no planning. We may be looked on as society where rules don't work. Comparing ourselves to Nigeria or any other African nation is childish indeed when most of our executives and Ministers have lived overseas and have been exposed to the best practices, methods and ways of doing things. A drive through Accra, especially around the central part of Accra, the Makola markets in Tudu, around Kaneshie markets, Agbogbloshie markets, and around the Tetteh Quarshie Round-about will convince anyone of what I am writing about. We need fundamental changes and we need to hire professionals and competent experienced managers, and more importantly hold them to the fire to perform or be fired.

Our Attitude: There are some who have given up on Ghana already. “It cannot be done”, they argue. Some also don't see the vision. “We have tried it before and it does not work”, they may argue. Others also see the black man incapable of solving our problems. “Let's call the boys at the World bank”, they cry out. With all due respect and modesty, none of the problems Ghana has are beyond solution. American technology and leadership helped put man on the moon just as I entered Engineering school in California over three decades ago. I will challenge anybody who argues that our cities cannot be planned anymore, or that Ghanaians are short of skilled manpower today, to take a second look at our current talent of manpower around the globe. Any human or societal problems do have solutions, and in the final analysis, only the natives are destined to solve their problems. So far, one visit to Abose Okai, and through the workers I have hired in Accra, I am impressed with the skilled manpower waiting only training in globally acceptable quality control standards. They simply need management from the top.

Singapore did get the formula and did it right! and so have Taiwan, Malaysia and others who were are the same level as Ghana at Independence. No excuses will suffice for our children. Changes don't happen by themselves. Roads don't build themselves, gutters don't cover themselves. Standing waters don't move by themselves, and mosquitoes don't emerge out of nowhere. We have the skills. What is missing? Views expressed by the author(s) do not necessarily reflect those of GhanaHomePage.