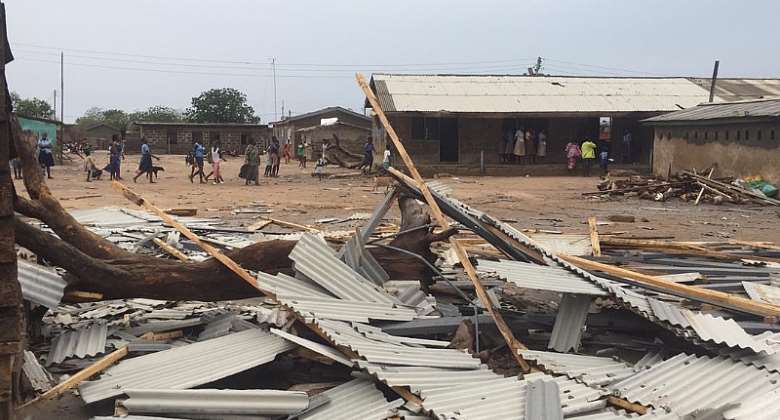 Communities in the Ada West District Toflokpo Anukpenya, Hanya, Korpeynguam, Salom—Madagber, Matsekope, Koluedor and others have been hit by a heavy rainstorm causing havoc and rendering some residents homeless as houses, churches, and a private school was destroyed.

The rainstorm which lasted about two hours on Friday was accompanied by strong winds which ripped off the roofing of the homes, churches, and the school building thereby exposing; properties, textbooks, exercise books, expensive musical instruments, electricity installations and accessories as well as other vital documents to the rain.

In an, interview Mr. Jerry Narh, the Deputy Director of the National Disaster Management Organization (NADMO) for the Ada-West District Assembly (AWDA) said the Faith Academy at Toflokpo Anukpenya near Sege’s roofing was ripped off and destroyed.

He added that three church buildings were also affected with the Apostolic Faith Church at Toflokpo Anukpenya having its roofing completely taken off by the heavy storm and over 80 residential buildings also affected.

"About 25 out of the pupils learning at the Faith Academy, a private basic school at Toflokpo Anukpenya before the incident, were injured and sent to the Sege Polyclinic where they were treated and discharged," he noted.

Mr. Narh said electricity poles were also destroyed, leaving cables exposed which led to a temporal power cut-off. It was however restored after the Electricity Company of Ghana visited the affected communities.

He explained that about 73 people have been rendered homes and were currently perching with other families as NADMO assesses the extent of damage adding that, "it is a very serious incident because we have big trees falling and all that".

He said NADMO would assess the cause of damage to the various communities and families, and present its report to the Assembly for further action.

Mr. Daniel Tetteh Ajesiwor, a resident of Sege who also has his building affected described the situation as a catastrophe.

Mr. Ebenezer Adabang, a resident of Toflokpo said, "I was at the farm but due to the storm, I went home only to find the roof of my house ripped off by the storm. I had no choice but to wander around until this morning”.

Madam Maamle, a victim at Matsekope also said she was lying on the carpet in her room, “and suddenly my door opened forcefully due to the pressure of the heavy storm.

“Then the roof ripped off immediately and the wood on the roof fell into the room, I don't even know what to say nor do".

Scores of affected residents who interacted with the media called for support from the government, NGOs, philanthropists and all individuals who are capable to help relieve them from the impact of the disaster on them.