Blinken in Morocco for security talks, meets with UAE leader 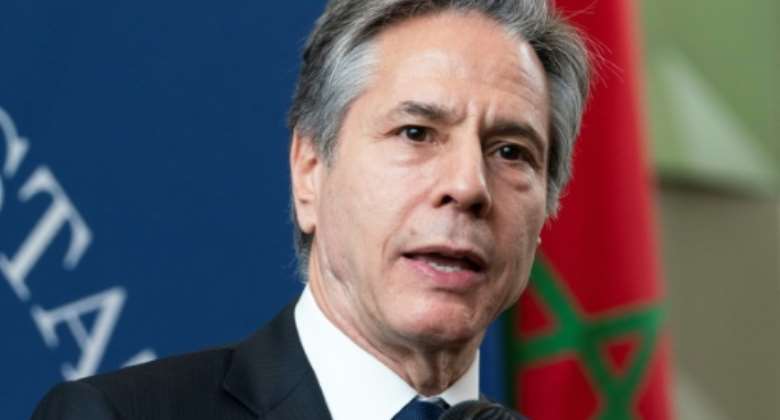 US Secretary of State Antony Blinken speaks to staff at the US Embassy in Morocco's capital Rabat on March 28, 2022. By Jacquelyn Martin (POOL/AFP)

His trip comes in the shadow of Russia's invasion of Ukraine, which along with sanctions against Moscow has sent wheat and fuel prices soaring in a serious blow to import-dependent North African countries.

Speaking to journalists in Rabat, Blinken said the US recognised the "disaster" the supply crunch had caused.

"We're discussing concrete steps we can take ... to help reduce the impact, particularly on the most vulnerable populations," he said.

Map of northern Africa locating Algeria and Morocco.. By (AFP)

Blinken also said he was "encouraging partners to speak out against Russian aggression" and said he doubted Russia's "seriousness" in talks with Ukraine held in Turkey.

Washington's top diplomat had flown into Rabat late Monday from Israel where he met his counterparts from the UAE, Morocco, Bahrain and Egypt, underlining a seismic shift in relations between Arab countries and the Jewish state.

On Tuesday, he met Moroccan Foreign Minister Nasser Bourita for discussions including on the Western Sahara dispute and security cooperation.

The same subjects will loom large in meetings the following day with Morocco's regional rival Algeria, after months of deteriorating relations between Rabat and Algiers.

The UAE has refrained from criticising Russia, even sending its top diplomat to Moscow, and recently hosted Russia-backed Syrian President Bashar al-Assad.

But MBZ welcomed Blinken warmly. Just ahead of their meeting, the US top diplomat emphasised that "the partnership between our countries really matters".

"At the same time, we have real challenges to confront together in the region and beyond," said Blinken, singling out the "terrorist attacks against the UAE" and Saudi Arabia by Yemen's Huthi rebels.

Their meeting comes amid an escalation in cross-border missile and drone attacks by the Iran-backed Huthis against infrastructure in the UAE and Saudi Arabia, allies in a grinding seven-year war that has laid waste to impoverished Yemen.

"We're determined to do everything we can to help you defend yourselves effectively" against the Huthis, Blinken added.

Blinken said he and the crown prince would also discuss the war in Ukraine and efforts to restore the landmark 2015 Iran nuclear deal, which aimed to limit the Islamic republic's nuclear development in exchange for loosening sanctions.

Former US president Donald Trump unilaterally walked out on that multilateral deal in 2018 and reimposed biting sanctions, provoking Iran into rolling back on its nuclear commitments, but months of negotiations in Vienna have sought to revive the pact.

US Secretary of State Antony Blinken (L) shakes hands with Morocco's Foreign Minister Nasser Bourita (R) during their meting in the capital Rabat on Tuesday. By - (AFP)

Blinken also discussed with his Moroccan counterpart the status of Western Sahara, a phosphate-rich former Spanish colony with a vast Atlantic coastline home to rich fisheries.

Morocco controls 80 percent of it, including a key highway towards West Africa, while the rest -- a desert area bordering Mauritania and Algeria -- is run by the Polisario Front independence movement.

Trump in 2020 recognised the region as sovereign Moroccan territory in a break with decades of US policy, after Rabat agreed to re-establish relations with Israel.

President Joe Biden's administration has been tight-lipped on how it will follow up on the move, which came just weeks after the Polisario declared a 1991 ceasefire null and void, sparking fears that the long-frozen conflict could flare up again.

Bourita on Tuesday called on European states to follow Spain in backing a Moroccan plan for autonomy there under Rabat's sovereignty.

"We think it's time for Europe ... to get out of this comfort zone where people are just supporting a process that doesn't mean supporting a solution," he said.

Demonstrators wave Western Sahara flags during a protest against the Spanish government support for Morocco's autonomy plan for Western Sahara, in Madrid, on March 26, 2022. By Pierre-Philippe MARCOU (AFP/File)

"There is a consensus that the solution should be within Moroccan sovereignty and the Moroccan plan of autonomy."

Blinken's visit to Rabat also comes as the US seeks stronger support for Ukraine from a region where many countries have been reluctant to criticise Moscow.

They include Morocco, which has declined to condemn Russia at the United Nations, frustrating both Washington and European capitals.