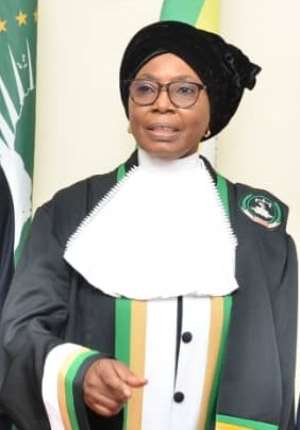 “This is an excellent development and we exhort Madagascar to also make the Special Declaration under Article 34(6) to allow individuals and NGOs to access the Court directly,” Lady-Justice Imani Daud Aboud, African Court President stated during the brief ceremony.

She also reminded other States which have not ratified the Protocol and made the Special Declaration to do so. Eight States have accepted the competence of the African Court and have deposited the Declarations in accordance with Article 34(6) to allow individuals and NGOs to directly file cases to the African Court.

In the absence of such a Declaration, the application must be submitted to the Banjul Commission first, which may then – after preliminary examination – decide to refer the case to the African Court.

She said the African Continental Court exists to protect human and peoples’ rights in Africa principally through the delivery of judgments.

The African Court President noted that the African Court applies the provisions of the African Charter on Human and Peoples’ Rights and other human rights instruments ratified by the States concerned, “it does not have criminal jurisdiction like the International Criminal Court”.

She said the African Court bases its core values on the African Charter and other internationally recognized principles of human rights and the promotion of the rule of law.

Lady Justice Aboud noted that the African Court continues to foster and uphold the core values of judicial independence from any partisanship, bias, influence, whether it comes from States, NGOs, funding agencies or individuals.

“Fair and impartial application and interpretation of the provisions of the African Charter, the Protocol, the Rules, and other relevant international human rights instruments.

“Transparent and ethical accountability in the operations of the Court. Fundamental rights of every individual to enjoy basic civil, political, social, economic and cultural rights are upheld,” she said.