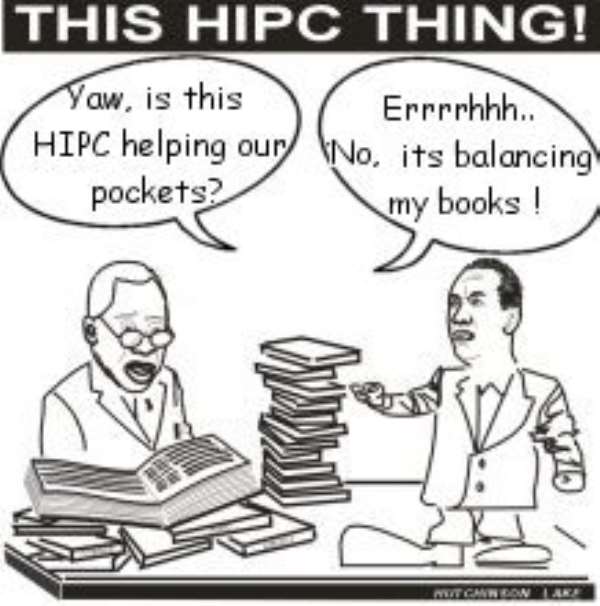 Countrymen and women, loyalists and opponents, Sometimes I get amazed by how 'little' things excite the people of Sikaman. A small spark – a government announcement or a wild rumour – throws the citizens of Sikaman into a wee-smoker's frenzy. They chant, sing, argue and even fight over little things – things like the announcement that our country has reached the completion point of the HIPC initiative.

I am not ashamed to admit that I don't know 'tiiii' about the mechanics of the HIPC initiative. I don't care where we are with the initiative. All I know is that by declaring that we were HIPC, we decided to make our ailment known in order to get some medication for it. Many of you didn't like the idea of us telling the rest of the world that we were poor and bankrupt. I understood your concerns at the time – by declaring HIPC, my government broke away from the typical Sikaman character of sweeping the dust under the carpet, keeping a cheerful, squeaky clean exterior whiles keeping the inner rot to ourselves.

Thank God for giving me the ability to behave adamant sometimes. Going HIPC was one of the best things I ever did for Sikaman. But I don't have a clue about how it works. All I know is that through HIPC we will be able to enjoy some debt relief, saving some money we would otherwise have used on debt servicing for other more important ventures. I could have declared 'yentua' but you don't behave like that in the comity of nations. The HIPC benefits are there for all to see. If you have not noticed the KVIPs on the Accra-Kumasi road and the 'borla' containers in Accra, which have been painted with the bright 'HIPC Benefit' banner am afraid you have two useless balls in your skull.

I believe strongly that we are yet to enjoy the fruits of HIPC. Right now these fruits are coming in dribs and drabs. That's why I do not understand the recent frenzy over the announcement that we have reached the HIPC completion point.

Omarfo-Sarfo organized a press conference in Accra to gleefully make the 'completion point' announcement like a war general who had won a major battle in the Kalahari Desert. I was so annoyed when I saw him on TV, surrounded by so many ministers of state and other 'idle big men' like the Governor of the Bank of Ghana, blabbing away, implicitly suggesting that reaching the completion point under the HIPC initiative is his biggest achievement to date as Finance Minister.

I don't ever want to see the funfair atmosphere created by government officials with their 'completion point' announcement again. Such celebrations should be reserved for that far-off day when we actually win the battle against Big Brother Poverty. The completion point does not mean anything to the real people of Sikaman.

HIPC completion point does not mean that majority of Sikaman citizens can afford three square meals a day. Since Omarfo Sarfo made his announcement, I have not gotten any indication that our people have stopped eating banku and hot 'moko yerawa' without fish. If completion point meant anything to our people, we would have seen multitudes jubilating on the streets; every Sikaman citizen would like to add HIPC to his or her name and we will probably have to call off the elections because having solved all the country's problems with my HIPC wand, even my staunchest opponents will want to see me stay in the castle, unopposed.

So I want Omarfo-Sarfo, and all the other ministers of state, to stop feeding an unnecessary frenzy. They should stop overselling the benefits of HIPC. Indirectly, they are helping the NDC propaganda machine and creating opportunity for our opponents to continually raise questions about the wisdom of joining HIPC. In the run up to the elections, it is going to be even more difficult justifying the many conditionalities that come with the HIPC package.

Taxes have to be collected, petroleum prices have to be increased and electricity and water tariffs will be hiked. All these will make life even more difficult for our people, helping to make things a little worse before they get better. So instead of jubilating and getting overly excited with our reaching the HIPC completion point, we should work harder to win the wider war on poverty.

I don't need tell you that as things stand now, poverty seems to be on the winning side. Its devastating bombardments have pushed millions of our people way beneath dignified living into a miserable existence. Our people have become slaves in their own land – thanks to Big Brother Poverty.

The poverty which enslaves our people cannot be defeated with HIPC and all its associated benefits. What we ought to do is to screw our heads on properly and use our brains as God intended brains for. Politicians should stop using their positions as platforms for enriching themselves. Citizens must demand more from their leaders and discourage them from exciting the whole nation with little things like the HIPC completion point. With or without HIPC we have to win the battle against poverty.