'Abraham in the Bible was called Abrew, Sarah is Serwaa, Jacob is Yaw Kobi; they were all black people' — Quotation Master 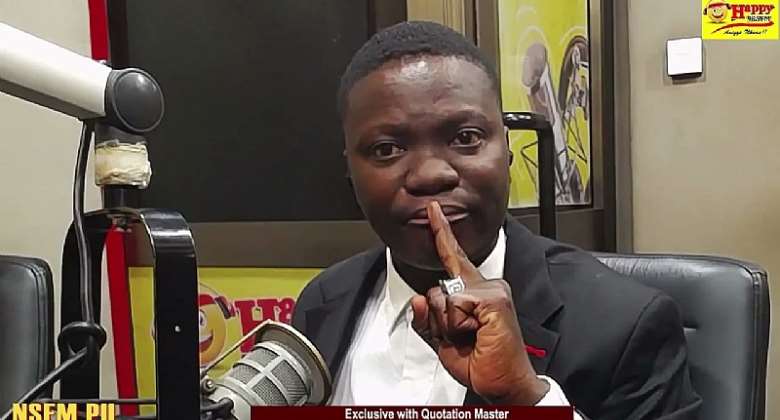 African Traditional Spiritualist, Teacher and Advocate, Nana Kwaku Peprah says most of the big names in the Bible were black people with African names which have been anglicised.

Quotation Master as he popularly called revealed that "Sarah is called 'Serwaa', Abraham is 'Yaw Abram' who is normally called 'Abrew' which was corrupted into Hebrew. Jacob is called 'Yaw Kobi' but I know most people would find it difficult to believe".

He continued "Moses is called 'Kwaku Mossi'. The Kwaku was removed and Mossi was changed to Moses. These were deliberately done so we cannot trace our ancestry. David was called 'Duodu' among the Akans while the Northern Israelistes called him 'Dauda'".

He made these revelations when speaking to CK on television CK about some aspects of African ancestry and the Bible.

He however shared that all these happened when Africans were conquered by the whites.He added that the whites deliberately transmuted all these names into the present names in the Bible after forcing Christianity on Africans.

The rational according to him, hiding the identity of the African and rule over them was easier for the White people.

Quotation Master intimated that all these were written by ancestors on plates and tablets which can be found in some museums in America, United Kingdom and Greece.

According to him, the Greeks copied all these from the Egyptian mythology which were written by African ancestors who were Blacks and later converted into "what we have been reading as the Bible altering anything about Africans".

In concluding on the subject, he advised all Ghanaians to wake up from slumber and begin to research into things that concern them especially the bible to able to unravel their true identity, liberate themselves and build a better future.