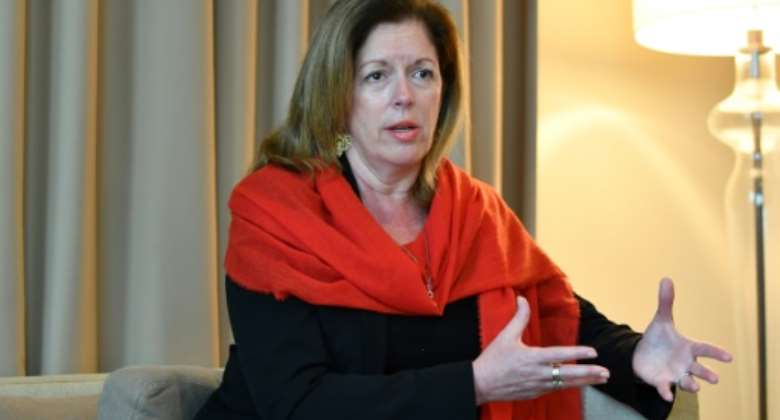 Stephanie Williams, Deputy Special Representative of the UN Secretary-General for Political Affairs in Libya, during an interview with AFP at a hotel in Tunis, on March 26, 2022. By FETHI BELAID (AFP)

The Libyan people want to end a decade of violence and elect a government, showing "zero appetite" for further conflict despite a renewed political standoff, the UN's top in-country official told AFP.

Speaking as concerns mount over the sustainability of a 17-month-old ceasefire, Stephanie Williams also insisted that deepening fractures, including a re-emergence of rival governments, can be "worked through".

"Most Libyans really want to put an end to 11 years of chaos, division and war -- and do so in a peaceful way by going to the ballot box," Williams said.

Libya was meant to hold elections last December, as part of a UN-guided peace process aiming to draw a line under a complex conflict that dates back to the 2011 revolt that toppled and killed dictator Moamer Kadhafi.

Libyan forces loyal to the Tripoli-based government take part in a military graduation parade in the northwestern city of Misrata on March 3, 2022. By Mahmud TURKIA (AFP/File)

But as political factions wrangled over their legal basis and the eligibility of controversial candidates, the polls were indefinitely postponed.

Williams said that was "a huge disappointment" to Libyans, especially after some 2.8 million citizens registered to vote amid a rare period of optimism following a landmark October 2020 ceasefire.

A new fissure deepened early this month when Libya's eastern-based parliament approved a new cabinet in a direct challenge to a Tripoli-based unity government that was painstakingly stitched together through UN-led talks a year ago.

That move was quickly followed by ominous military manoeuvrings on the capital's outskirts.

"There is a crisis over the executive, there is a political conflict over who sits in Tripoli," Williams acknowledged in an interview with AFP on Saturday in Tunisia.

"But that can be worked through."

The latest in a long line of standoffs pits Prime Minister Abdulhamid Dbeibah's interim government in Tripoli against Fathi Bashagha, a former interior minister chosen by parliament as his successor.

Libya has found itself with two governments after the eastern-based House of Representatives appointed Fathi Bashagha, on the left, in a challenge to the Tripoli-based premier, Abdulhamid Dbeibah. By Abdullah DOMA, GEOFFROY VAN DER HASSELT (AFP/File)

Bashagha is supported by eastern-based military strongman Khalifa Haftar, who waged a devastating but ultimately unsuccessful 2019-2020 offensive against a previous "unity government" in Tripoli.

Bashagha's backers say Dbeibah was only meant to lead the country to the December 24 vote -- and that his mandate has therefore expired.

But the incumbent insists he will only cede power to an elected administration.

Libyans gather in Tripoli on February 18, 2022 for the 11th anniversary of the uprising that toppled longtime strongman Muammar Kadhafi. By Mahmud Turkia (AFP/File)

Williams, an Arabic-speaking American diplomat who reports to UN Secretary General Antonio Guterres, has warned publicly against escalation and offered to mediate.

Williams said she had met thousands of people from across the country in recent months.

Based on those talks, "there is zero appetite to return to large-scale conflict in Libya," she said.

"There's always going to be a degree of shallow legitimacy attached to any executive that is not directly elected by the people."

The political manoeuvring that has obstructed elections has also laid bare the "massive disconnect between the political class and the body politic", she added.

Cadets of the special forces of the self-styled Libyan National Army affiliated with eastern strongman Khalifa Haftar take part in a graduation ceremony in the eastern city of Benghazi, on January 20, 2022. By Abdullah DOMA (AFP/File)

In her efforts to mediate a way out of the mess, Williams has been urging the upper house -- based in Tripoli -- and the eastern-based lower house to negotiate a constitutional basis for elections.

It's a key sticking point in a country that has had no constitution since Kadhafi tore the last one up in 1969.

But the lower house has yet to agree on delegates to the talks, she said.

"We're at a crucial inflection point for them to come to the table with good intentions and in good faith to sort this out," Williams said.

But she voiced confidence that a deal could be reached, pointing to the example of talks held in 2020 following the bitter military conflict over Tripoli.

Mass graves in the western Libya town Tarhuna, seen on February 9, 2022. For years a brutal family clan there killed hundreds of people. By Mahmud Turkia (AFP/File)

"They can do this," she said. "But they have to get to the table.

"Step number two is to sit and actually negotiate seriously and in good faith, knowing that you've got three million people watching you," she added, referring to Libyans who had collected voting cards.

"That should be enough pressure."