"Our macho MP who has turned into a bouncer, boxer in parliament taking credit for NPP projects" — Ayensuano NPP 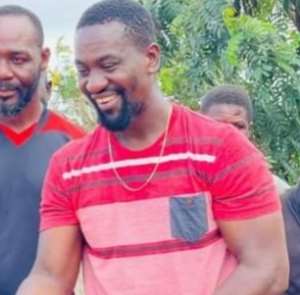 The New Patriotic Party (NPP) in the Ayensuano constituency of the Eastern region has taken a swipe at the actions of the Member of Parliament for the area, Hon. Nana Yaw Teddy over comments he made on Accra based United Television (UTV.)

In a press statement, the Communication Director of the party, Mr. Budu Yaw Asamoa said the MP was on record for claiming credibility of some ongoing reshaping of some roads in the municipality as well as a hospital which is been constructed under Government 'Agenda 111 program'.

He stressed that both the reshaping of roads and the construction of the hospital are part of government programs.

Mr Asamoa noted that the MP lied for claiming to be responsible for such projects in the constituency.

He added the MP has attended only one Assembly meeting since assumption into power two years ago and therefore finds it outrageous for such a person to claim responsibility of projects he has no knowledge of.

He also talked about the MP's alleged misconduct in the House of Parliament in the e-levy blows indicating that, "Not too long ago, the macho MP who was voted to represent the interest of the Constituency has rather turned to be a boxer or better put a bouncer at the August House fighting. The Honorable Youth and Sports Minister whom he cut his face open a mini-sports complexes and other Youth programs aimed at giving a livelihood to the youth of such areas. Nothing can be said in our case. Will the Minister or any right-thinking person allow such a character that upon the least provocation will fight you or sending him to represent us in parliament. He has turned the honour done him. This character and behavior has brought upon us curse, disgrace, agony and regrets for sharp object is bringing change and hope to other constituencies with the construction of cut your face open with a sharp object?"

The party is therefore calling on the MP to use the same medium to apologise to the people of Ayensuano and Ghana as a whole for peddling untruth on live television.

RE -RESHAPING OF SOME SELECTED ROADS IN AYENSUANO AND CONSTRUCTION OF AYENSUANO DISTRICT HOSPITAL.

It has come to our attention of the frivolous and mischievous propaganda being peddled about by the Member of Parliament for the Ayensuano Constituency, Hon. Nana Yaw Teddy Addy Saforo on United Television (UTV). In as much as we the good people of Ayensuano are in no way surprise about the lies being peddled, we are much concerned about the future of our dear district/ constituency.

Not too long ago, the Macho MP who was voted to represent the interest of the Constituency has rather turned to be a boxer or better put a bouncer at the August House. This character and behavior has brought upon us curse, disgrace, agony and regrets for sending him to represent us in parliament. He has turned the honour done him into fighting. The Honorable Youth and Sports Minister whom he cut his face open with a sharp object is bringing change and hope to other constituencies with the construction of mini-sports complexes and other Youth programs aimed at giving a livelihood to the youth of such areas. Nothing can be said in our case. Will the Minister or any right thinking person allow such a character that upon the least provocation will fight you or cut your face open with a sharp object?

We were again expecting our Rambo MP to stand in the full glare of the cameras in parliament to kneel and beg the minority when they decided to stage a walkout during discussion of the loan agreement that will see to the construction of the hospital in Ayensuano. Not long ago, he assembled some pressmen and kneeled on the ground to beg the President of the Republic of Ghana, H.E Nana Addo Dankwa Akuffo-Addo to come to his aid and help construct roads in Ayensuano. We were expecting same with regards to the construction of the district hospital, a facility that would bring relief to his constituents and help save lives. He never stood up to beg his own people to as a matter of urgency approve the loan agreement. Such a character can not be trusted.

We are amazed at the posture of the Honorable MP, particularly the reshaping of some selected roads in Ayensuano, where he claimed to be the one who initiated it. We wish to put on records that, Hon. Nana Yaw Teddy has no hand in the said reshaping nor contributed a penny for the execution of that project. We demand a retraction and an apology from the MP. In fact, it’s the Honorable DCE of Ayensuano, Hon. Josephine Ansaah Awuku Inkoom who through her leadership skills saw the need to give relief to her people. There are evidence and documents to show for that, which we have attached for purposes of verification. We expect Hon. Nana Yaw Teddy to provide same documents or receipts of the payments he made to the said constructor who came to reshape our roads.

Our checks at the assembly shows that the said Honorable Member since he took up office as the MP for Ayensuano has been at assembly meeting just once. He has never shown interest in any business that goes on at the assembly, even as at the time the reshaping of roads in Ayensuano came up for discussion at the assembly sitting, he was not present to proffer a suggestion or contribute to that exercise. It’s therefore comes as a surprise for him to be parading about as the new sheriff in town who has come to turn around the fortunes of Ayensuano Constituency over this short period of time.

The NDC party he represents in Ayensuano are even asking for his whereabouts. They claim he has not been picking their calls since he became an MP. He has dejected the party in the Constituency. He does not honour their invitation for programs in the constituency and has packed out of the place he use to occupy before being voted for as an MP.

We wish to as a matter of urgency to put this across to him that, we will not sit down for him to bring shame to us. Ayensuano is one of the most respected constituencies in the Eastern region and our pride will never be sold out. We demand that he goes back to the same media house and program and render a well-deserved apology to the good people of Ayensuano that he knew nothing about the road reshaping in some selected towns and communities in the district and again, the hospital is a government policy aimed at providing easy and accessible healthcare to all. Which is one of the governments flagship program themed as Agenda 111.

We wish to also apologize to the President of the Republic, H.E Nana Addo Dankwa Akuffo-Addo and the Minister of Youth and Sports, Hon. Mustapha Ussif of the disgrace and pain the Honorable Member of Ayensuano Constituency has brought on them.

To this end, we wish to state again that, we demand an apology, one with a genuine feeling of regret from Hon. Nana Yaw Teddy. He must understand that Ayensuano can’t develop on lies and propaganda. He is just a caretaker MP representing us for one term. We shall marshal an equal force and wrestle power back and by the grace of God, on 7th January, 2025 when the speaker of parliament is swearing in elected MPs, Ayensuano will have someone who will not peddle lies, someone who understands the plight and will have the interest of the good people of Ayensuano at heart.

The Managing Director Despite Media-Accra. The Editor - UTV News