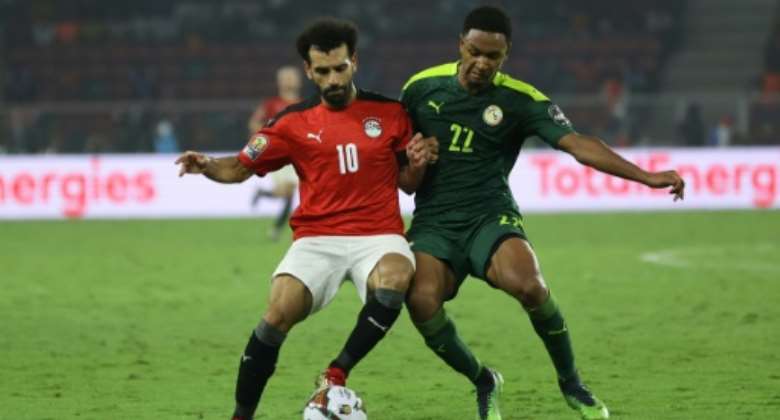 Egypt captain Mohamed Salah has vowed to avenge an Africa Cup of Nations final loss last month to Sadio Mane-inspired Senegal when they clash again on Friday in a 2022 World Cup play-off.

Failure in the continental final was particularly bitter for prolific Liverpool scorer Salah as he was also part of the Egyptian team that lost the 2017 Cup of Nations final against Cameroon.

Liverpool teammate Mane played a pivotal role in the first Cup of Nations triumph of Senegal -- atoning for a penalty miss in regular time by converting the spot-kick that won the shoot-out.

Egypt host the first leg on Friday and Senegal have home advantage next Tuesday with the aggregate winners filling one of five places reserved for Africa at the 32-nation finals in Qatar.

Here, AFP Sport looks ahead to the five first legs with Cameroon seeking a record-extending eighth appearance by an African nation at the World Cup and Mali hoping to reach the finals for the first time.

Senegal coach Aliou Cisse says the Cup of Nations triumph is history and all that matters is securing a second straight World Cup appearance.

"Winning the Cup of Nations is not an end in itself because we share a common goal of playing at the World Cup again," he told reporters.

Egypt welcome back star goalkeeper Mohamed el Shenawy, who missed the Cup of Nations final through injury, but they were the second best side in the African title decider and start as underdogs.

The Egyptian media reported Egypt captain Mohamed Salah telling his teammates after the penalty shoot-out defeat in Cameroon that "we meet them (Senegal) again next month and inshallah (God willing) we will take revenge".

Nigeria are favoured, but tradition suggests a close affair with each nation winning twice in previous World Cup qualifiers and four other meetings drawn.

Both fared poorly at the Cup of Nations with Ghana shock first-round casualties after losing to minnows Comoros and Nigeria making a timid last-16 departure against Tunisia.

Nigeria boast a stronger squad than they had in Cameroon with forwards Emmanuel Dennis, Odion Ighalo and Victor Osimhen now available, but injured midfielder Wilfred Ndidi misses out.

Hosts Cameroon fired Portuguese Toni Conceicao after finishing third at the Cup of Nations and hired legend Rigobert Song on the orders of President Paul Biya.

Song has chosen most of the team eliminated by Egypt in the semi-finals and there will be much interest in how he treats Bayern Munich forward Eric Maxim Choupo-Moting.

Choupo-Moting was furious at the not making the starting line-up against the Pharaohs and teaming up with captain and leading Cup of Nations scorer Vincent Aboubakar and Karl Toko Ekambi.

Algeria suffered a disastrous Cup of Nations title defence, going out after the first round, and coach Djamel Belmadi has dumped 11 of the squad he took to Cameroon in January.

The Democratic Republic of Congo are alone among the 10 contenders in not having the benefit of match practice at the Cup of Nations -- they came third in a qualifying group and missed out.

It could be advantageous, though, as Morocco will not have recent footage of the Leopards, whose only previous World Cup appearance was in 1974 when the country was called Zaire.

However, it is no secret that Dieumerci Mbokani is the man Morocco must shackle after the 36-year-old scored four goals in qualifiers having been recalled after several years in the wilderness.

Cup of Nations quarter-finalists Morocco boast a star full-back in Ashraf Hakimi, but Chelsea winger Hakim Ziyech will be absent due to a fall-out with coach Vahid Halilhodzic.

Mali and Tunisia met at the Cup of Nations in Cameroon and a tale of two penalties ended with the Eagles from west Africa winning 1-0 after Ibrahima Kone scored and Wahbi Khazri missed.

A boost for Mali is the belated decision of France-born Everton midfielder Abdoulaye Doucoure to represent the country of his parents.

Tunisia, who fell to Burkina Faso in the Cup of Nations quarter-finals, have recalled forward Taha Yassine Khenissi after he completed a six-month doping ban.