Uganda issues arrest warrant for author who fled after 'torture' 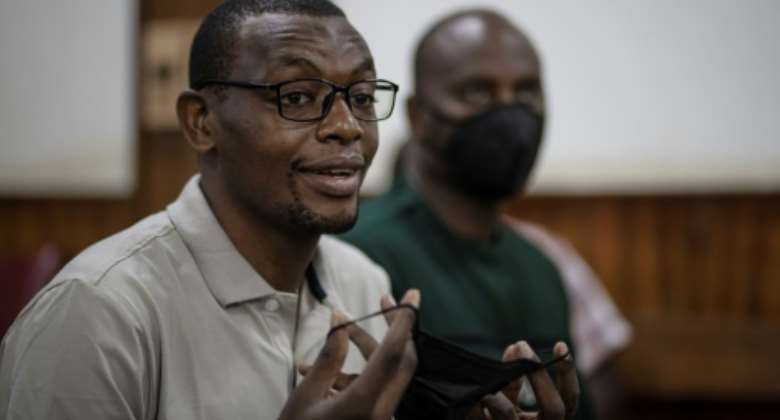 Kakwenza Rukirabashaija was awarded the 2021 PEN Pinter Prize for an International Writer of Courage. By Badru KATUMBA (AFP/File)

A Ugandan court has issued an arrest warrant for an award-winning author who fled the country after being charged with insulting President Yoweri Museveni and his son, his lawyer said Wednesday.

Kakwenza Rukirabashaija was arrested shortly after Christmas and charged with "offensive communication" in a case that raised international concern, with the European Union and the United States calling for his release.

The 33-year-old said he was tortured during his month-long detention and slipped out of the country last month to seek treatment abroad for his injuries.

But on Wednesday, prosecutors asked the Kampala court to issue a warrant of arrest against the satirical novelist after he failed to show up for the trial.

The magistrate ordered he "be arrested and brought to court," lawyer Samuel Wanda told AFP.

It was not immediately clear if the warrant would include an extradition request to Germany where Rukirabashaija said he was exiled.

The charges against him relate to unflattering comments on Twitter about Museveni, who has ruled Uganda since 1986, and his powerful son Muhoozi Kainerugaba.

In one post, he described Kainerugaba, a general who many Ugandans believe is positioning himself to take over from his 77-year-old father, as "obese" and a "curmudgeon".

The author was awarded the 2021 PEN Pinter Prize for an International Writer of Courage, which is presented annually to a writer who has been persecuted for speaking out about their beliefs.

Rukirabashaija has been repeatedly arrested since the publication of "The Greedy Barbarian", which describes high-level corruption in a fictional country.

At the time, he was accused of breaching Covid-19 social distancing rules, inciting violence and promoting sectarianism.

He described his earlier stint in detention as "inhumane and degrading" in his most recent book "Banana Republic: Where Writing is Treasonous".

The East African country has seen a series of crackdowns on those opposed to Museveni's rule, with journalists attacked, lawyers jailed, election monitors prosecuted and opposition leaders violently muzzled.

Human Rights Watch on Tuesday asked the government to close illegal detention centres in a report documenting the prevalence of torture at such sites, a claim denied by the military as "baseless".

"We do not condone torture as alleged in the report," Ugandan military spokesman Brigadier-General Felix Kulayigye told AFP, adding they had "investigated and taken action against our own officers implicated in human rights violations."

The report came on the heels of another court decision Monday ordering the release on bail of author and activist Norman Tumihimbise and a female journalist, who were charged with cyber-stalking Museveni.