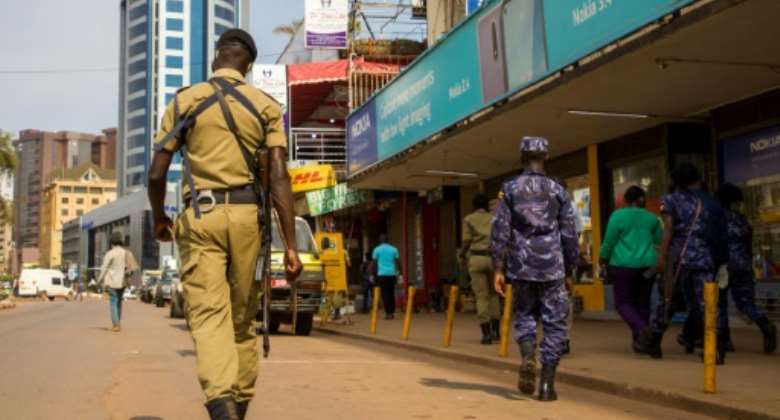 Former detainees described a litany of abuse at the hands of police, army officials and Uganda's domestic intelligence agency. By Badru Katumba (AFP/File)

Uganda's government must stop using illegal detention centres as a weapon against dissidents and close the facilities, Human Rights Watch (HRW) said Tuesday in a report documenting the prevalence of torture at the clandestine sites.

The report featured interviews with 51 people, including 34 former detainees and eyewitnesses to abductions, who described a litany of abuse at the hands of police, army officials and Uganda's domestic intelligence agency, the Internal Security Organisation (ISO), between April 2019 and November 2021.

In many cases, the whereabouts of those detained remain unknown, HRW said, more than a year after the re-election of President Yoweri Museveni, who has ruled Uganda with an iron fist since 1986.

"Human Rights Watch calls on the government of Uganda to immediately close all so-called safehouses and other unauthorised detention centres," the global rights body said.

"The authorities should immediately release all detainees held in such places of detention or bring them promptly before a court to be charged."

Victims told HRW about being bundled into vans known as "drones", which are associated with abductions of government opponents in Uganda, before being taken to secret detention sites supervised by the ISO.

The locations ranged from residential neighbourhoods in the capital Kampala to an island in Lake Victoria, where detainees were allegedly tortured, with their captors pulling out their fingernails, burning their bodies with an iron or sexually assaulting them.

In some cases, victims were handcuffed, chained and suspended from the ceiling for a dozen hours at a time, in a technique called "Rambo".

A pregnant detainee told HRW she was raped twice and beaten by an officer while in custody, causing her to miscarry and undergo a hysterectomy.

After leaving the hospital, she was tortured once more.

Others spoke of being injected with unknown substances or subjected to electric shocks, while some described seeing detainees with bricks hanging from their testicles.

Hassan Mutyaba, a businessman who spent eight months in captivity, told a press conference in Kampala most of his fellow detainees were too frightened to speak out publicly.

"We are not going to survive. Today (I) am here but I won't be there tomorrow because I have come out," he said at the event organised by HRW.

In February 2020, the parliament's house committee on human rights published a report documenting cases of torture at detention centres operated by the police and ISO and called for further investigations.

But no such probes have taken place, HRW said.

"Urgent steps are needed to help victims, to hold abusive security agents to account, and to end this spectre of impunity and injustice," said Oryem Nyeko, Uganda researcher at HRW.

Award-winning Ugandan author Kakwenza Rukirabashaija fled to Germany last month to seek medical treatment after allegedly having been tortured following detention on charges of insulting Museveni and his son.

People arrested by his bureau were "subjected to horrific beatings and other egregious acts by officials, including sexual abuse and electrocutions, often resulting in significant long-term injury and even death," the US Treasury said, announcing the sanctions.

Kandiho was appointed to the top command of the country's feared police force last month.